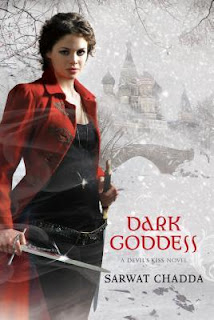 From Goodreads:
Billi's back, and it seems like the Unholy just can't take a hint. Still reeling from the death of her best friend, Kay, Billi's thrust back into action when the Templars are called to investigate werewolf activity. And these werewolves are like nothing Billi's seen before.

They call themselves the Polenitsy: man killers. The ancient warrior women of Eastern Europe, supposedly wiped out centuries ago. But now they've come out of hiding and are on the hunt for a Spring Child - an Oracle powerful enough to blow the volcano at Yellowstone - and start a Fimbulwinter that will wipe out humankind for good.

The Templars follow the stolen Spring Child to Russia, and the only people there who can fight the supernatural are the Bogatyrs, longtime enemies of the Templars. To reclaim the Spring Child and save the world, Billi needs to earn the trust of Ivan Romanov, a young Russian soldier whose suspicious of people in general, and of Billi in particular.


Dark Goddess is a page-turning, action-packed sequel that spans continents, from England to the Russian underworld and back. This is an adventure of folklore and myth become darkly real. Of the world running out of time. And of Billi SanGreal, the only one who can save it.

My Review:
This was a really awesome book! I loved the first one, and with that twist, that should've been obvious, but played out so well, well, yeah, I was hoping for a book that was just as good at that! This book came pretty close, too!

So things are different, because hey, Billi's fulfilled the prophecy thingy, and killed the person that she loved. So that's a horrible experience, and it affected her a good deal, which is pretty obvious to tell, after all, it was Kay, her best friend and the person she loved the most.

One good thing about the fact that it's set in Russia, is that we get a pretty much full next cast of characters to met. Well, maybe only one or two that we actually get to know, but we know that there are others there. And seeing her experiences in the past book, this is a pretty good thing for Billi!

I kinda wanted this book to be longer, because I want to spend more time with these characters, but I don't want them to have another full book of conflict. So it would've been awesome if these book was longer, these characters and this world was just so great!

Loved reading this book, it was a really great sequel to Devil's Kiss!