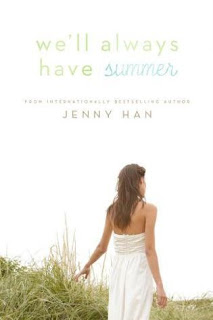 From Goodreads:
It's been two years since Conrad told Belly to go with Jeremiah. She and Jeremiah have been inseparable ever since, even attending the same college-- only, their relationship hasn't exactly been the happily ever after Belly had hoped it would be. And when Jeremiah makes the worst mistake a boy can make, Belly is forced to question what she thought was true love. Does she really have a future with Jeremiah? Has she ever gotten over Conrad? It's time for Belly to decide, once and for all, who has her heart forever.

My Review:
So this is it, the final book in the series, where Belly makes the decision, once and for all, which boy that she really truly loves, is in love with, and not just loves like a brother. Because hey, if the relationship works out with one of them, they will be siblings in law!

So Belly was happy, but she wasn't as happy as she could be. And yeah, things happened, and things worked out, and some things didn't, and yeah, in the end, I think she makes the right choice for her, and things work out pretty well!

There is some drama there, seeing as her choice made her cancel the wedding, which honestly, I wish that we'd gotten to see them telling the family's that, and then seen the reactions, because that would've been fantastic!

One thing that I would've loved, would be a bigger, longer, more detailed epilogue. We read the these books, and then we get to the happy ending, and yeah, I just wanted to see more of it! Then it would've felt all the more better!

I enjoyed this book-and this series-so much, now I can't wait to read Burn for Burn!