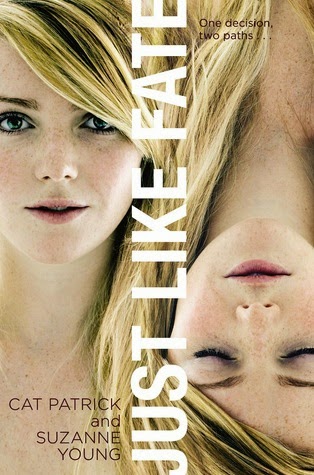 From Goodreads:
Caroline is at a crossroads. Her grandmother is sick, maybe dying. Like the rest of her family, Caroline's been at Gram's bedside since her stroke. With the pressure building, all Caroline wants to do is escape--both her family and the reality of Gram's failing health. So when Caroline's best friend offers to take her to a party one fateful Friday night, she must choose: stay by Gram's side, or go to the party and live her life.

The consequence of this one decision will split Caroline's fate into two separate paths--and she's about to live them both.

Friendships are tested and family drama hits an all-new high as Caroline attempts to rebuild old relationships, and even make a few new ones. If she stays, her longtime crush, Joel, might finally notice her, but if she goes, Chris, the charming college boy, might prove to be everything she's ever wanted.

Though there are two distinct ways for her fate to unfold, there is only one happy ending...

My Review:
I enjoyed this book so much! And seeing the different sides, one where she stayed, and one where she left, those different lives, yeah, they were great! I mean, initially, her stay life was better, but in the end, her go life was much better!

This is a short book, page wise. But plot wise, well, things decisions are made doubly, because what she decides in one life, she chose the other in the other life. And that back and forth was just awesome to read about!

The differences in each life were big at first, because while staying or going from her Gram's side was a small one, the consequences of that are pretty big, but as life goes on, the differences become more subtle, as some things, are meant to be!

I enjoyed the romance on both sides, it was just good, because between Joel and Chris, I enjoyed Chris a lot more! He was the better person, and more interesting, and just the better fit for Caroline! So I'm glad that the ending was the go life!

I enjoyed this book so much, Cat Patrick and Suzanne Young made an excellent writing duo!