Yeah, we have the cover of Dreamfall by Amy Plum! And it's awesome! 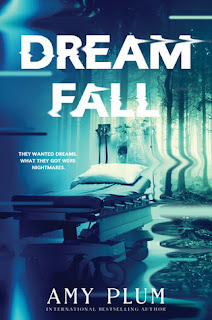 From Goodreads:
A radical experiment to cure chronic insomnia goes wrong, and its seven teenage test subjects are plunged into a shared coma populated by one another’s nightmares; those who die in the dream will also die in real life.

Sleep comes easily for most people—but it is an unattainable dream for Cata Cordova, Fergus Willson and the five other teens who volunteered to take part in a radical new treatment. They suffer from devastating insomnia and are desperate for help. So desperate that they’re willing to undergo an experimental procedure, which has only ever been tested on one other patient. They’re supposed to be the beta group. But this time, nothing goes as planned….

Soon after the seven of them are put under, catastrophe strikes and they find themselves thrown together in a shared dreamworld with no memory of the experiment or any idea of how they got there. As Cata, Fergus and the others try to figure out what’s happened to them, they come to the terrifying realization that they are trapped inside a world where their worst nightmares come to life. Hunted by creatures from their deepest, darkest imaginations and tormented by terrible secrets they’d rather keep buried, the teens are forced to band together to face their biggest fears. And if these dreamers can’t find a way to defeat them, they won’t have a hope of ever waking up.


Oh, yeah, this sounds-and looks-so fantastic! Her blog post mentions the cover of the other book in the duology, which makes me super excited! I love how things are vague and dreamlike, in the font, and in the image of the hospital bed, and the out doors! It looks so good! What about you guys? Happy reading!
Posted by Louisa @ Words I Write Crazy at 2:24 PM