Week 44 Review: The Girl in the Picture 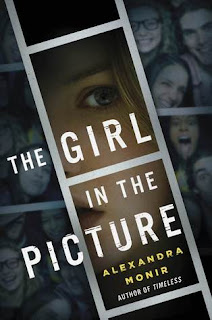 From Goodreads:
One dead body, one photograph, one comprimising secret. Everyone's a suspect in this classic "who done it" murder mystery from Timeless author, Alexandra Monir.

Nicole Morgan has been labeled many things—the geeky music girl, the shy sidekick of Miss Popularity, and the girl with the scar. Now only one name haunts her through the halls of Oyster Bay Prep.

The girl in the picture.

After heartthrob Chace Porter is found dead in the woods near the school, the police search for the girl snuggled up next to him in a picture discovered among his personal effects. A girl no one knew was even close to him—and whose best friend, Lana Rivera, was his girlfriend.
Nicole is that girl, and now she's the primary suspect in his murder.

What happened that night? Were Nicole and Chace dating behind Lana's back? Were he and Lana over? Could either of the girls have killed him?

In alternating points of view—that of suspect Nicole Morgan and that of Lana Rivera—The Girl in the Picture helps readers piece together the truth behind a friend's betrayal, a boy's murder, and way too many secrets.

My Review:
I really enjoyed reading this book! I've previously enjoyed her books (though I still need to read Suspicion, which I have to read soon now!) and yeah, this was was really great! I loved the mystery, and the slight paranomoral, and of course, the romance!

I loved the way that this story was told-Natalie in the present, Lana in the past, and then it switched. That told us the fullest story of these two girls, without any Chase POV's besides the beginning and the end. Fantastic to read!

These girls were friends, and because of a boy, they weren't. And while they were mostly friends because of the boy, that complicated matters! Their families played pretty important roles, mainly Lana's congresswoman mom and Chase's congressman dad. There were political pressures, Lana's mom wanted her to be just like her. Which created a not-so-great situation for the 3 teens to be in!

There were quite a few secrets in the end. And betrayals and miscommunications. And yeah, this was a big part of the mystery, because one secret is why Chase died. And navigating the murky waters to find the truth made for an excellent ending! I kinda read the ending before I was done, so I was looking for the clues, and I found them! Loved the ending, so excellent!

This book was just fantastic and enjoyable, and I can't wait to read more by Alexandra Monir!