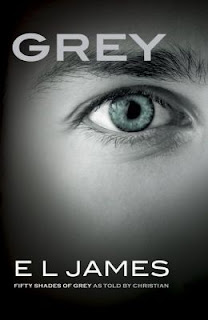 From Goodreads:
In Christian's own words, and through his thoughts, reflections, and dreams, E L James offers a fresh perspective on the love story that has enthralled millions of readers around the world.

Christian Grey exercises control in all things; his world is neat, disciplined, and utterly empty—until the day that Anastasia Steele falls into his office, in a tangle of shapely limbs and tumbling brown hair. He tries to forget her, but instead is swept up in a storm of emotion he cannot comprehend and cannot resist. Unlike any woman he has known before, shy, unworldly Ana seems to see right through him—past the business prodigy and the penthouse lifestyle to Christian's cold, wounded heart.

Will being with Ana dispel the horrors of his childhood that haunt Christian every night? Or will his dark sexual desires, his compulsion to control, and the self-loathing that fills his soul drive this girl away and destroy the fragile hope she offers him?

My Review:
I really enjoyed reading this book, and having Christian's POV of the events of Fifty Shades of Grey. Sure, I initially thought that this book would cover the whole series seeing as it was 400 pages on my reader, but nope, just the first book here!

He was very angsty, which was a bit surprising, given the way that Ana saw him, but not so much given his past. He really didn't like himself, calling what he saw in the mirror a prick. But he did have nightmares of when he was a child, which can help understand why he was the way that he was.

There were a few things that annoyed me after a while. Like "laters, baby" or "fair point well made" because the first is just weird, and the second was just used over, and over, and over again! A little variation, and less weirdness, would've made this book so much better!

Seeing things from his POV, knowing how things were going to end, it was really interesting, the details that we got. Like, his relationship with Elena. And the things that were going on with him when he wasn't with Ana. I really enjoyed that!

This book was pretty great, and I can't wait for the book with his POV of Fifty Shades Darker!