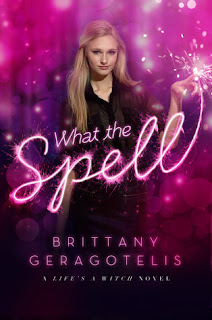 From Goodreads:
BE CAREFUL WHAT YOU WITCH FOR...

BROOKLYN SPARKS IS INVISIBLE. Because she's not a popular kid or an übernerd, Brooklyn is stuck somewhere in the middle of the high school food chain. But all of that is about to change.

On the eve of her sixteenth birthday, Brooklyn comes of age as a witch. Her strict parents finally unbind her powers and, along with giving herself an instant makeover, Brooklyn discovers her true gift: She was born into a line of magical matchmakers.

After spending so long being overlooked, Brooklyn's getting exactly what she wants, including entrée into the elite crowd and her crush's undivided attention. But there's a price to pay. The use of her powers puts Brooklyn in the same dangerous position as her Salem ancestors - if anyone finds out who she really is and what she can do, her life is over.

Why the time hasn't come yet...
I don't know! It sounds so great, and yeah, I just really want to read it! What about you guys? Happy reading!
Posted by Louisa @ Words I Write Crazy at 6:00 AM