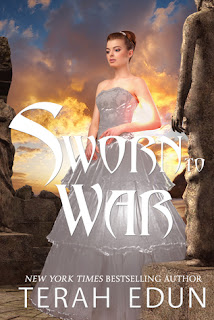 Synopsis:
Whenever I write in the Courtlight character arc for Lillian Weathervane, I always find such joy in depicting her delicious snarkiness, her wit, and her love of family. But I also wonder…what was she like before she had children? When Lillian was the center of the court dynamics? I knew that she was hell in heels, but I never quite imagined just how far she’d go. That was how this short story was born.

She is ready to face the god that they've known was coming for months, but the people that she thought would coalesce around her are faltering under the pressure, the lies, and the deceit.

She knows that the very foundation between ruler, nobility, and commoner had fractured down to its core. Now the capital city and its people need to be reforged, bound in fire before they're consumed by brimstone.

But the citizens of the empire need more than a speech to believe in the rulers that betrayed them just days before. With their empire on the line, Sebastian lays out his first ruling edict which may be more than even he bargained for.

As Sandrin comes together once more before the final struggle, the daemoni prince is struck down and the princess heir-in-waiting has doubts as to whether they can forge a more perfect union without the one that completes their souls.

With Thanar trapped in purgatory while they fight to resurrect the city that gave them life—Ciardis and Sebastian are in a battle to the death against a god bent on living forever.

My Review:
Oh, wow, these books were just so fantastic! We got a look at the past, and then Sworn to War started off right after the evil cliffhanger ending of Sworn to Sovereignty, and yeah, totally went in a direction that I didn't expect! I just absolutely loved reading them, they were so fantastic!

Lillian in Heels was very interesting! It gave us a look not only at Lillian before she was a mom, but at the empire before everything happened. So yeah, that was just amazing, and I loved reading it! It was an intriguing story!

This is the book where we learned more about the false emperor's plans. Well, mostly the reason why-the dragons. And the buried city had a part to play there! And it was half-I want to know more about this, and half kill him now before he has a chance to thwart them! Ah, well!

This series has changed a lot over the course of these books! From her companion training in the first book, to as the synopsis says, facing threats from the dragons and the gods, yeah, this series has grown, and I've loved reading every word of it! The synopsis of War was a bit misleading-over half of this book deals with confronting Maradian and the aftereffects!

Twists and turns abounded in this book. Like Lillian. That was all kinds of strange, and totally threw the good guys for a loop! Or that Maradian had stopped Raisa from reporting his deeds to her Queen. Or figuring out what kind of mage Maradian was! And what he did to Thanar! Gah!

I'm just wondering, why didn't Sebastian use his connection with the earth to make them a tunnel out of the room that they were trapped in? Sure, they wouldn't get any more answers out of Maradian, but they also wouldn't have been his captives.

Absolutely loved the ending! After the ending of Sovereignty, it was  great to have an ending that was a victory for the triumvirate! Of course, there's still plenty to deal with-at least two books worth-but for now, this was a victory ending!

And yeah, I found this page, which has the 4 series in this world-Crown Service, Algardis, Courtlight, and Sacredcourt. And I'm wondering if Mage by Chance is Red Madrassa. And we have the title for the book after Quell, Sworn to Restoration! And Sacredcourt takes place after Courtlight! Gah, so excited!

This book was just utterly fantastic, and I can't wait to read Sworn to Quell!