Week 42 Review: Touched by an Alien 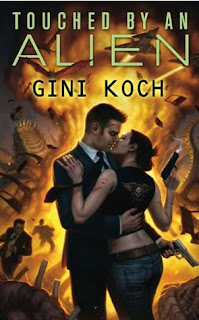 From Goodreads:
How can a sexy marketing manager join forces with an Alpha Centauri male in Armani to save the planet-using hairspray, a Mont Blanc pen, and rock n' roll?

She's "Touched by an Alien"

Marketing manager Katherine "Kitty" Katt steps into the middle of what appears to be a domestic dispute turned ugly. And it only gets uglier when the man turns into a winged monster, straight out of a grade-Z horror movie, and goes on a killing spree. Though Kitty should probably run away, she springs into action to take the monster down.

In the middle of the chaos a handsome hunk named Jeff Martini appears, sent by the "agency" to perform crowd control. He's Kitty's kind of guy, no matter what planet he's from. And from now on, for Kitty, things are going to be sexy, dangerous, wild, and out of this world.

My Review:
Reading this book was just so fantastic! I enjoyed it so, so much! There was so much going on with this world that was just so fantastic and enjoyable! I loved it! I loved all the details that we got, and it's kinda amazing that this is just the beginning-that there'll be more!

The world! I won't stop raving about this world! It was so intricate and so well built, and just plain interesting! And that this was a pretty long book, meant that we had a lot of time to get to spend in this world, and there's at least 13 more books in this series, yeah!

Kitty was very interesting! She had a normal life-until all this happened. And then it turned out that both her parents had some secrets that were connecting to this world! And she was pretty smart, figuring out about the text, and the secrets that they were holding! So great!

Loved the battles, and how Kitty used the weaknesses of regular creatures on the monstrous versions! Like the salt water on the slug! That was just awesome, and there was a lot of quick thinking! Just action packed and awesome!

This book was just fantastic, and I can't wait to read more of this series!