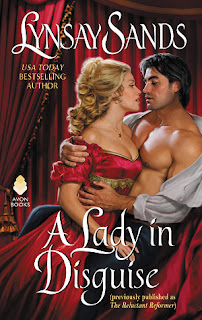 Lady Maggie Wentworth must support herself as an investigative reporter. Writing under another name, she's been exposing the notorious scandals of the ton—this time it's the "working girls" of London. While interviewing the women, a client enters, and Maggie is shocked to see her beau. She changes clothes with one of the girls and flees out the window, only to be whisked away by a stranger.

Lord James is honoring a deathbed promise: watch over his late friend's sister. Following Maggie to a house of ill repute, he's stunned to see her emerge dressed as the notorious Lady X! Hard times must have driven her to such a desperate act, and he is intent on reforming the wanton chit. No amount of protest will stop him from saving her reputation. Now if only he can hold his own desires in check—and keep himself from falling in love.

My Review:
Wow, this book was a lot of fun to read! I know it was previous published, though I don't know if the actual book content changed or not. But since I hadn't read that, and this just came out, well, i just had to read it, and I'm so glad, because it was just a lot of fun!

Reading about Maggie and James was a lot of fun. Maggie's in a tough spot, since she's female and didn't inherit the family estate, and women of nobility, it's frowned upon for them to work, but she needs to support her household. James lost his most of his family when he was young, so he's trained himself not to feel the extreme of emotions. What a fun pairing! I loved how they couldn't control their passion while in libraries!

I knew there was a scene where Maggie confronts James about his thinking she was a prostitute, and ends up kicking his shin. And when we got to that point, yeah, it was just as hilarious as it had been the first time when I read it in an excerpt!

Who the bad guy was, that was pretty unexpected. I mean, we had to know that the scarred man was just a flunkie, not the one who wanted Maggie gone. So when we found out who it was, yeah, that was unexpected, and fantastic to read!

Loved reading this book, it was a really fantastic read!