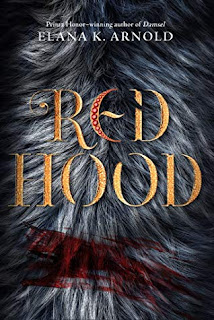 From Goodreads:
You are alone in the woods, seen only by the unblinking yellow moon. Your hands are empty. You are nearly naked.

And the wolf is angry.

Since her grandmother became her caretaker when she was four years old, Bisou Martel has lived a quiet life in a little house in Seattle. She’s kept mostly to herself. She's been good. But then comes the night of homecoming, when she finds herself running for her life over roots and between trees, a fury of claws and teeth behind her. A wolf attacks. Bisou fights back. A new moon rises. And with it, questions. About the blood in Bisou's past and on her hands as she stumbles home. About broken boys and vicious wolves. About girls lost in the woods—frightened, but not alone.

Elana K. Arnold, National Book Award finalist and author of the Printz Honor book Damsel, returns with a dark, engrossing, blood-drenched tale of the familiar threats to female power—and one girl's journey to regain it.

My Review:
Wow, I really enjoyed reading this book! It was kinda dark and intense-and brutally honest. It's the story of girls finding their power, be that physically or using words. And it deals with plenty of rough subjects, like sexual assault, the incel group, but also hope for the future, as well.

I really enjoyed how this story was told. There were three parts, the beginning where it's pretty normal until it isn't. Then we have the middle, which is her grandmother telling her story, her past. And then the end, we're back in the present, and yeah, this structure and storytelling made for excellent reading!

One of the best parts of this book for me was the group of friends that Bisou made. They became very close, and it was a great example of friendship, of strong bonds. They were females lifting up and supporting other females, and that's just fantastic!

I kinda wish that we got to explore what made boys wolves. There's mention of specific compounds in the two boys that could potentially cause the change-but how did they get to that point? Because if they know that, they can prevent boys in the future from becoming wolves in the first place.

There's this one comment that a parent made in the book, that their son had a bright future. Except, that if he's doing the things that he's been accused of, well, that's not a bright future. That's a criminal. Except crimes against females just aren't given the same weight as other crimes, which just repeats the cycle. Because it's this unbalanced dynamic between girls and boys that puts boys before girls at the expense of the girls, that teaches boys that girls aren't worth as much as they are. It's infuriating!

Yeah, this book was so fantastic, and I enjoyed it so much!