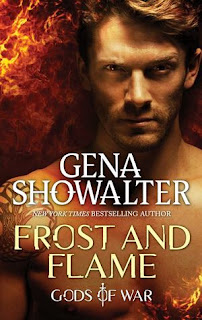 From Goodreads:
From Gena Showalter, the New York Times bestselling author of the Lords of the Underworld saga, comes Frost and Flame , the second book in the scorching paranormal romance series Gods of War.

Bane of Adwaeweth is the most feared immortal warrior in All War history. Possessed by a bloodthirsty beast, he will stop at nothing to win. Then he meets irresistible Nola Lee. He hates the power she wields over him, but she alone can rain vengeance upon his wife's killer.

Unaware of her destiny to rule as queen of beasts, Nola battles illness, addiction and vulnerability. With Bane, however, she experiences pleasure for the first time, and only wants more. But being with him comes with a terrible price.

With enemies lurking around every corner, Bane and Nola must fight to survive. But time is running out, and neither can resist the sizzling attraction blazing between them. Will their romance save the beast and his beauty, or destroy everything they've come to love?

My Review:
Wow, it was so freaking great to read this book! I loved spending time with Nola and Bane, more time spent in this world! We learned so much more about these two, about Bane's world and species, what Nola has to deal with, and yeah, watch them fall in love! It was so great and sweet and dirty!

I was wondering before I read this book when it would take place in consideration with Shadow and Ice. So it takes place about the same time, so we haven't seen anything time-wise, new, but we did definitely get to see things from Nola and Bane's perspective, and what they did that Vale didn't know about! Which was so freaking great!

So Nola has fibromyalgia and lupus. Managing those two, she's become addicted to the meds she has to take-because coming off them is brutal, as she experiences throughout this book. And having to deal with that as well as being a foster kid, well, she might not have the best physical strength, but mentally and emotionally, those she has strength in spades!

Wow, really enjoyed how things turned out! That was pretty intense, and I didn't know how it was all going to come together. Both Gena Showalter and Nola were smart, and I loved that ending! There's hope for the future!

Loved reading this book so much, and I can't wait to see where it's going to go from here and who's going to star in the next book!