Week 30 Review: An Enchantment of Ravens 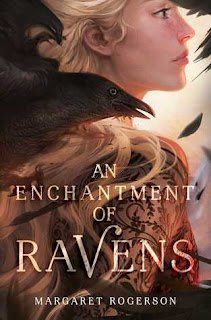 From Goodreads:
A skilled painter must stand up to the ancient power of the faerie courts—even as she falls in love with a faerie prince—in this gorgeous bestseller that's "an ideal pick for fans of Holly Black, Maggie Stiefvater, and Laini Taylor" (Publishers Weekly, starred review).

Isobel is an artistic prodigy with a dangerous set of clients: the sinister fair folk, immortal creatures who cannot bake bread or put a pen to paper without crumbling to dust. They crave human Craft with a terrible thirst, and Isobel's paintings are highly prized. But when she receives her first royal patron—Rook, the autumn prince—she makes a terrible mistake. She paints mortal sorrow in his eyes—a weakness that could cost him his life.

Furious, Rook spirits her away to his kingdom to stand trial for her crime. But something is seriously wrong in his world, and they are attacked from every side. With Isobel and Rook depending on each other for survival, their alliance blossoms into trust, then love—and that love violates the fair folks' ruthless laws. Now both of their lives are forfeit, unless Isobel can use her skill as an artist to fight the fairy courts. Because secretly, her Craft represents a threat the fair folk have never faced in all the millennia of their unchanging lives: for the first time, her portraits have the power to make them feel.

My Review:
Oh, wow, this book was so strange and wonderful! It was a really fantastic read! The world was really amazing, and I enjoyed reading about these characters! I did want to learn more about the world, like there was this other world where it was mentioned, but we didn't learn pretty much about it.

The relationship between Isobel and Rook was kinda strange. After all, he's not human and he's going to live so much longer than she will, and has already. And then there's the whole kidnapping thing, and if they are in love with each other at the same time, they're breaking the rules and will be killed. Yeah.

For some reason, I thought that the bad guy was an insidious force, being very clever, and had taken over the other courts. But nope, it's just because the Summer King was asleep and things were rotting away. So not a very active force, but without attention, things turn to chaos, given enough time!

That ending, yeah, it was improbably and a one in a million chance result. And the fact that they were nudged into it, well, that doesn't excuse the pain that they went through with it. And while I would like to know more about how the world has changed because of what they did, it was a pretty great ending!

This book was so great, and just a delightful read!