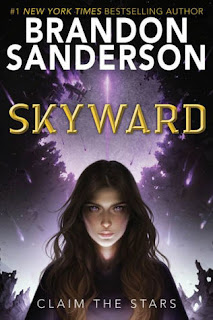 From Goodreads:
Defeated, crushed, and driven almost to extinction, the remnants of the human race are trapped on a planet that is constantly attacked by mysterious alien starfighters. Spensa, a teenage girl living among them, longs to be a pilot. When she discovers the wreckage of an ancient ship, she realizes this dream might be possible—assuming she can repair the ship, navigate flight school, and (perhaps most importantly) persuade the strange machine to help her. Because this ship, uniquely, appears to have a soul.

My Review:
Wow, this book was so fantastic, I wasn't expecting to read it, and I just devoured it. It's a pretty long book, and it's not the only hefty one that I read on the 24th, which to me, says that I read 2 really enticing books that I just couldn't put down! Always a good thing!

I just loved Spensa's bravado, her insults were very bloodthirsty and violent and pretty hilarious. Though they became something of an existential crisis with how violent her culture is, and how they despise cowards. And as she gained battle experience, she felt like a coward. Or her idea of one. Since she was still going out there and fighting, she doesn't fit mine!

One big mystery in this book, was what happened in that battle that marked her dad as a coward. That wasn't the dad that Spensa knew. And that mark of shame as followed her ever since, and has made her life pretty darned difficult. And it turns out, we got one piece of the puzzle pretty early.

I just loved her relationship with M-Bot was the best, their banter was amazing, like his need to know about the different fungi, and his insistence that he's not a fighter plane. There were a few rough moments-like the recording of her father's disgrace and death-but there were some really great moments like flying, as well!

Loved this book so much, and yeah, can't wait for the sequel!