Week 27 Reviews: The Recitation of the Most Holy and Harrowing Pilgrimage of Mindy and Also Mork, Tricks for Free, That Ain't Witchcraft, The Measure of a Monster 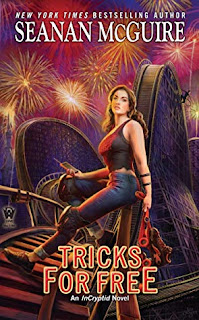 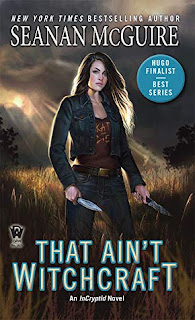 From Goodreads:
This story takes place after Magic for Nothing, and should not be read before finishing the book.

From Goodreads:
Penance, noun:
1. Punishment for past actions.
2. An attempt to pay for what can't be bought.
3. See also "exile."

Antimony Price is on the run. With the Covenant on her tail and her family still in danger, she needs to get far, far away from anyone who might recognize her—including her own mice. For the first time in a long time, a Price is flying without a safety net. Where do you go when you need to disappear into a crowd without worrying about attracting attention? An amusement park, of course.

Some people would call Lowryland the amusement park. It's one of the largest in Florida, the keystone of the Lowry entertainment empire…but for Annie, it's a place to hide. She's just trying to keep her head down long enough to come up with a plan that will get her home without getting anyone killed. No small order when she's rooming with gorgons and sylphs, trying to placate frustrated ghosts, and rushing to get to work on time.

Then the accidents begin. The discovery of a dead man brings Annie to the attention of the secret cabal of magic users running Lowryland from behind the scenes. They want the fire that sleeps in her fingers. They want her on their side. They want to help her—although their help, like everything else, comes with a price.

No plan. Minimal backup. No way out. Annie's about to get a crash course in the reality behind the pretty facade. If she's lucky, she'll survive the experience.

Antimony Price has never done well without a support system. As the youngest of her generation, she has always been able to depend on her parents, siblings, and cousins to help her out when she's in a pinch—until now. After fleeing from the Covenant of St. George, she's found herself in debt to the crossroads and running for her life. No family. No mice. No way out.

Lucky for her, she's always been resourceful, and she's been gathering allies as she travels: Sam, fūri trapeze artist turned boyfriend; Cylia, jink roller derby captain and designated driver; Fern, sylph friend, confidant, and maker of breakfasts; even Mary, ghost babysitter to the Price family. Annie's actually starting to feel like they might be able to figure things out—which is probably why things start going wrong again.

New Gravesend, Maine is a nice place to raise a family…or make a binding contract with the crossroads. For James Smith, whose best friend disappeared when she tried to do precisely that, it's also an excellent place to plot revenge. Now the crossroads want him dead and they want Annie to do the dirty deed. She owes them, after all.

And that's before Leonard Cunningham, aka, "the next leader of the Covenant," shows up…

It's going to take everything Annie has and a little bit more to get out of this one. If she succeeds, she gets to go home. If she fails, she becomes one more cautionary tale about the dangers of bargaining with the crossroads.

From Goodreads:
InCryptid novella appearing at the end of That Ain't Witchcraft.

My Review:
Wow, I enjoyed reading these books so much! Annie is a pretty fantastic character, and I loved going on further adventures with her! The first short story was so hilarious, and so great to have, since we didn't get the mice in the full length books, which is a little sad because they're some of my favourite parts of this series!

These books dealt with two things-magic, and the crossroads. I really enjoyed learning about both of them, though it was more Annie being taught a bit, and we're told about it, not so much us learning about it. But there was so much going on, like accidents, and her growing group of friends, and the Covenant threat! So great!

That Ain't Witchcraft, we find out what Thomas Price's deal with the crossroads was. Well, if we didn't already know, it's been a while since I read the rest of the series. But since it's why he's gone in the series, and why Alice is looking for him. So it's kinda important!

I was wondering before reading That Ain't Witchcraft, on how the situation with the Covenant was going to be handled. And whether they could ever come around to seeing that they were in the wrong. I still have hope, but it didn't happen here, but progress was made, I think!

Loved reading these books and I can't wait for more, with Sarah narrating! So excited!

The Recitation of the Most Holy and Harrowing Pilgrimage of Mindy and Also Mork:

The Measure of a Monster: