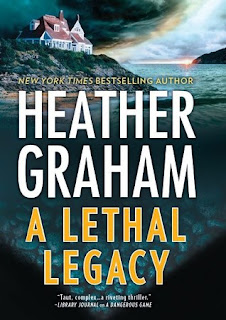 From Goodreads:
TREASURE OR TREACHERY?

Douglas Island sits off the coast of New York State, its imposing cliffs warning away visitors. Still, Finn Douglas has big plans for his inheritance and the rambling manor house that dominates the landscape. He has a vision to turn the island into a resort getaway for overworked city dwellers. But when the broken body of his business partner is found at the base of the rocky escarpment, he fears it wasn't an accident.

Special Agent Craig Frasier agrees to help his cousin Finn by investigating and, with psychologist Kieran Finnegan at his side, heads to the island. As Craig and Kieran delve into the history of the Douglas estate, they discover that the property comes complete with strange lore and a blood-soaked past. Something evil seems to be lurking in the caverns that run beneath the stony ground. Is there something on the island that someone is willing to kill to protect? Kieran and Craig take on a dangerous search for the truth, where one false step could send them plummeting to their deaths, and one wrong turn could bring them face-to-face with a killer.

My Review:
Yeah, I loved reading this book! This series is so great to read, and yeah, really enjoyed this next mystery! And it's funny, because this time, it isn't Kieran who entangles them in the case, but Craig, because it's his second cousin (their parents were first cousins, so I believe this is right) who calls him in.

This mystery was pretty interesting. There was exploring the history of the Knights Templar and the Arc of the Covenant. Then there were aliens, and yeah, that was an interesting mix that was a lot of fun to read!

So it's funny, Craig did talk about fanatics. and it turns out that they were there. That they went on to do what they did, it's like, why do people get so set in their ways that they do such horrible things like stone people to death?

This book was a little twisty. Because we had a confrontation, but there was still about 50 or so pages left, so then there was another one. So yeah, loved that and just how tricky this mystery was. Just an incredible read!

Such a great book, and I wouldn't mind more books in this series, it's so enjoyable!