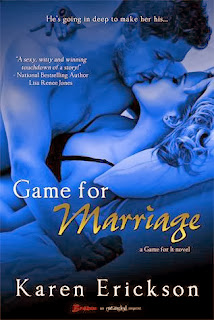 From Goodreads:
He's going in deep to make her his…

Struggling artist Sheridan Harper never imagined she'd spend a sizzling night with Jared Quinn, the smoking-hot star quarterback of her local professional football team, the San Jose Hawks. And she's even more shocked when Jared's publicist offers her a proposition: a fake marriage to keep Jared out of the gossip mags. Being that close to Jared would be too tempting, so to protect her heart, she insists on secretly including a clause forbidding sex between them.

Jared just wants to keep his starting QB job and keep it in San Jose. His reputation as a ladies' man has landed him in the headlines one too many times, but there's something about his kind, passionate new wife that tempts him beyond reason. Any sort of intimacy between them is completely forbidden, but as their bodies fall in deep, will their hearts follow suit?

My Review:
This such a great book! So funny, and awesome! Just the idea of a fake marriage (which has been done before) but with the no sex clause, well, yeah, that makes things interesting, since there is that attraction between them!

I really enjoyed their story, they worked well together, they just had some kinks that they had to work out before they really hit their stride, and this book was about them learning about each other, working out their problems, and falling in love! It was great to read!

Their story was about them, learning to work together. It was also about the both of them, as individuals, and learning about each of them, which was really great. Because they were people that were interesting, and would want to know!

Really enjoyed how it all worked out, because it was good, and worked out well! The whole issue with the fake marriage with the no sex clause worked out fine, and they ended up happy together, and yeah, it was a great ending to a great book!

I enjoyed this so much, and I can't wait to read more of this series, this book started an excellent one, I just know it!