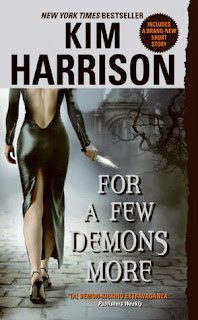 From Goodreads:
Despite dating one vampire and living with another, Rachel Morgan has always managed to stay just ahead of trouble...until now.

A fiendish serial killer stalks the Hollows, and no one living in or around Cincinnati - human, inhuman, or undead - is safe.

An ancient artifact may be the key to stopping the murderer - a mysterious relic that is now in the hands of Rachel Morgan, fearless independent bounty hunter and reckless witch. But revealing it could ignite a battle to the death among the vast and varied local supernatural races.

Rachel's been lucky so far.
But even she can't hide from catastrophe forever.

From Goodreads:
To save the lives of her friends, Rachel did the unthinkable: she willingly trafficked in forbidden demon magic. And now her sins are coming home to haunt her.

As Rachel searches for the truth behind a terrifying murder, an even greater menace threatens, for the demon Algaliarept will stop at nothing to claim her, and the discovery of a shocking family secret throws Rachel's entire life into question. If she is ever to live free, Rachel must first walk willingly into the demonic ever-after in search of long-lost ancient knowledge.

But when you dance with demons, you lay your soul on the line...and there are some lines that should never be crossed.

My Review:
So something that I've been noticing, is that a pretty big thing in this series, is that Rachel will solve a problem, but then in the next book, something about the fixing, is causing her trouble now. And it's just fun to connect the dots, the Al stuff started in Dead Witch Walking, and then a few other things, too!

One thing that annoys me, is characters mentioning things, saying they happened last year. But most of the things they're mentioning are 3-6 months ago, which means they happened in the same year that this is happening. So yeah, that's my little annoyance.

For a Few Demons More was pretty heart-breaking! I mean, Kisten! That was really hard, especially since we didn't find out he was dead for a another chapter or two, and in this series, lots happens in each on, it seemed like more time passed then it actually did.

Then Outlaw, working with Trent to get the 5000 year old elf sample, well, that was certainly interesting! Loved how she solved that, and I can't wait to see the consequences of that, because I know there's going to be something coming soon-after all, there's 11 books out right now!

Loved reading these books so much, it's such a great series, and I can't wait to read more!

For a Few Demons More: