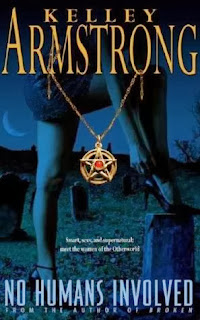 From Goodreads:
Jaime, who knows a thing or two about showbiz, is on a television shoot in Los Angeles when weird things start to happen. As a woman whose special talent is raising the dead, her threshold for weirdness is pretty high: she's used to not only seeing dead people but hearing them speak to her in very emphatic terms. But for the first time in her life – as invisible hands brush her skin, unintelligible fragments of words are whispered into her ears, and beings move just at the corner of her eye–she knows what humans mean when they talk about being haunted.

She is determined to get to the bottom of these manifestations, but as she sets out to solve the mystery she has no idea how scary her investigation will get, or to what depths ordinary humans will sink in their attempts to gain supernatural powers. As she digs into the dark underside of Los Angeles, she'll need as much Otherworld help as she can get in order to survive, calling on her personal angel, Eve, and Hope, the well-meaning chaos demon. Jeremy, the alpha werewolf, is also by her side offering protection. And, Jaime hopes, maybe a little more than that.

My Review:
This book was really so good! I mean, it's Jamie and Jeremy's story, and while they are the oldest characters, that doesn't mean that they don't have a lot of room for conflict. Especially since they're in their romance, slowly going through the various things, the emotions and the complications.

I found it so funny, the one scene, where they were trapped in the basement, and the owners were doing their thing, and so Jeremy was distracting Jaime with the paper games, that was just such a Jeremy thing to do! I just loved that!

I enjoyed the mystery to this book! Because the bodies and everything that started to pile up while they were recording the show, with the other 2 mediums, who aren't supernatural, yeah, that brought up some complications!

This was such a really great book, I just loved Jamie and Jeremy, they were so awesome, now to reread more!