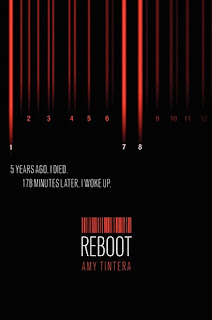 From Goodreads:
Five years ago, Wren Connolly was shot three times in the chest. After 178 minutes she came back as a Reboot: stronger, faster, able to heal, and less emotional. The longer Reboots are dead, the less human they are when they return. Wren 178 is the deadliest Reboot in the Republic of Texas. Now seventeen years old, she serves as a soldier for HARC (Human Advancement and Repopulation Corporation).

Wren's favorite part of the job is training new Reboots, but her latest newbie is the worst she's ever seen. As a 22, Callum Reyes is practically human. His reflexes are too slow, he's always asking questions, and his ever-present smile is freaking her out. Yet there's something about him she can't ignore. When Callum refuses to follow an order, Wren is given one last chance to get him in line—or she'll have to eliminate him. Wren has never disobeyed before and knows if she does, she'll be eliminated, too. But she has also never felt as alive as she does around Callum.

My Review:
This was a really fantastic book! So unique and original, though it kinda sucks that only the younger people actually come back, but it's kinda worse, that a 12 year old would come back, and then train to be a solider, and then do the same to others.

The whole idea of kids coming back as reboots, well, it's really interesting! Though, of course, this is a dystopian book, so yeah, of course it's all twisted around, and they're used as soldiers, which is not cool at all!

Because yeah, some of the big themes that this book touched upon for me, were government, slavery, control, death, and murder, in varying orders, because this book had all of that! It was all mixed in together, but it was there!

Loved that Callum was the one that brought out her humanity, making her see that the number didn't matter, just because she rebooted, doesn't mean that she isn't still human. And yeah, with all of the elements in this book, the mystery, the romance, and everything, that was the best part!

Really enjoyed this book, and I can't wait for more!