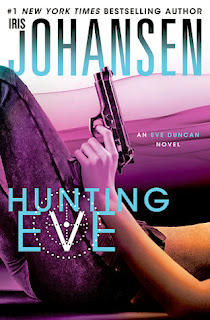 From Goodreads:
In the second book of Iris Johansen's heart-stopping new Eve Duncan trilogy, the stakes get higher. Eve Duncan is on the run. Kidnapped by Jim Doane, a mysterious man who wants her to complete a sinister forensic sculpture, she now has no time to savor the victory of escaping from him. He's back on her trail and closing in fast. Doane desperately needs Eve's skill to reconstruct the skull of his son -- a sick and twisted killer who still holds Doane in thrall from beyond the grave. The CIA has its own reasons for tracking Eve's nemesis. And those closest to Eve -- Joe Quinn and Jane MacGuire -- are doing everything in their power to rescue her, while a hired gun named Lee Zander is on a personal mission to eliminate Doane.

So one bit, was Jane and her working on the investigation. And since she was shot, she has to deal with that, and yeah, she's kinda luck that she has Caleb there, what with his strange uniqueness. But that's a complication, seeing as the attraction there, while Mark is there. So Jane has a choice ahead of her!

I really enjoyed reading Kendra and Margaret's interactions. Kendra is a what you see, what you touch person. Margaret has a gift that's pretty much the opposite. And seeing as they are stuck in one car for an extending amount of time, well, yeah, that was really interesting to read about!

Yeah, what with that ending, I wonder how it's going to go from there! Because if I didn't know this was a trilogy in the series, then I would've thought, near that ending, that it was the end of that! Because I mean, they were all gathering, they were there, and then it was over. But it's not, and it's a trilogy, and I can't wait for more! We know she's alive, but still!

I just loved reading this book so much, and I can't wait for more!