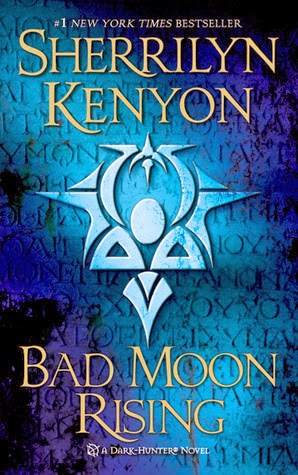 From Goodreads:
A stunning and suspenseful new landscape emerges in the thrilling Dark-Hunter world—a world where nothing will ever be the same again. . .

Fang Kattalakis isn't just a wolf. He is the brother of two of the most powerful members of the Omegrion: the ruling council that enforces the laws of the Were-Hunters. And when war erupts among the lycanthropes, sides must be chosen. Enemies are forced into shaky alliances. And when the woman Fang loves is accused of betraying her people, her only hope is that Fang believes in her. Yet in order to save her, Fang must break the law of his people and the faith of his brothers. That breech could very well spell the end of both their races and change their world forever.

The war is on and time is running out...

My Review:
So when I first read this book, it was a long time coming. And in this book, we see just how long, because it has their first meeting, and various events that led up to the ending of this book! Which was just so heart-wrenching!

The scene were Anya gets tasered? And what results because of that? That was just so sad and horrible, that their sister died, and there was nothing they could do, not even save the lives of the cubs she was carrying.

That ending was pretty brutal! A lot of fighting, and a lot of death-including Mama and Papa Peltier, who had bonded, and died because Mama had saved the live of Fang. Sad, bittersweet, but showing that she'd accepted him. And leaving some hope for the future!

I just loved reading this book, a lot happened, and that ending, the first mention of day-walking daimons since they happened in One Silent Night!