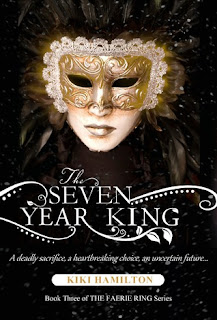 From Goodreads:
It is the seventh year—the time when the UnSeelie Court must pay a tithe to Seelie royalty to remain a separate entity. Sacrificed at midnight on Samhain, the UnSeelies call their offering the Seven Year King. This time, Donegal plans to sacrifice someone Tiki loves. To make matters worse, Fiona disappears, Johnny lies near death, and the threat of the liche comes closer. Tiki's only hope is that she and Rieker can find an ancient faerie treasure and outsmart the Winter King before the turning of the seasons. In this third book of The Faerie Ring series, Tiki is pulled between two worlds—and unable to find peace in either.

A deadly sacrifice, a heartbreaking choice, an uncertain future…

My Review:
I just absolutely loved reading this book! It's just so great and addicting, with such great characters, and conflicts, that just make my heart pound and my head wonder what's going to happen next, because you never ask if it could get worse-you wonder what that "worse" is going to be!

The stakes are raising, even more, because it's the 3rd book in the series-and the fourth one is the last as we currently know it. So there's that. And then there's all these things that are going on, well, it's dangerous for pretty much everyone!

The reaction of Leo, when he finds out that Tiki is a Queen? Yeah, that was really hilarious! It pretty much made the book, after all the struggles, in trying to defeat or at least circumvent Donegal! Just so great!

Oh, that ending? With Larkin and Clara? Oh, man, that was a hard ending! I guess some of it should be expected, that Larkin was Clara's mother. But that Larkin would do that to Clara if Tiki didn't give over the crown to her? Not cool, dude!

Such a great book, with such a cliffhanger, I just want more now! I wants it, I wants it!