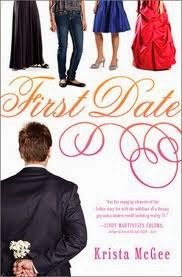 From Goodreads:
The last thing Addy Davidson wants is to be on a reality TV show where the prize is a prom date with the President's son.

She's focused on her schoolwork so she can get a scholarship to an Ivy League college, uncomfortable in the spotlight, never been on a date, and didn't even audition for it.

But she got selected anyway.

So she does her best to get eliminated on the very first show. Right before she realizes that the President's son is possibly the most attractive guy she has ever seen in person, surprisingly nice, and seemingly unimpressed by the 99 other girls who are throwing themselves at him.

Addy's totally out of her comfort zone but that may be right where God can show her all that she was meant to be.

My first review of First Date
My Review:
I enjoyed reading this book again! I'd forgotten some of the little details-like that she was part of the effort to keep him safe from a bad guy that one time, and that she wasn't the one that got the date at his big dance. But that doesn't matter, because she's the one that won his heart, and vice versa!

I just really enjoyed reading this book! Addy didn't feel comfortable being on the show, and she wasn't a girly-girl like most of the rest of them. She did make her friends, and she had her uncle there, too, as security, and then there's her relationship with God.

Which I found really special, her parents were missionaries, and they died doing that work. And she has a deep connection to God, and her principal suggested that this opportunity would be a chance to spread some of her faith, which Abby did. And that was really great!

Yeah, that there's a kinda sequel in Starring Me, because Kara was one of Addy's friends, and yeah, I really enjoyed their friendship-like when they were in New York, and they visited with Kara's family, that was really sweet! I enjoyed that a lot!

This was a really fantastic book, and I really loved reading it again! I really need to read Starring Me!