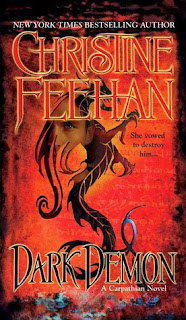 From Goodreads:
For as long as she can remember, Natalya has been fighting demons: first in the form of childhood nightmares, then later, immortal creatures that kill and prey on the innocent--including her own twin brother. Whether Carpathian or vampire, she slays those who murder by night, and has no equal--until she is seduced by the very thing she considers her enemy...

A Carpathian who has seen nearly everything in his endless existence, Vikirnoff doesn't think he can be surprised anymore--until he faces a woman who rival him as a vampire hunter. A formidable and gifted warrior in her own right, Natalya has a nature that is strange familiar--yet alien--to his own. Who is this mysterious female who fears no one--not even him? Natalya could the key to the survival of the Carpathians, but Vikirnoff is certain of is that she is the key to his hear and soul...

My Review:
This was a fantastic book! Though I'm made at it, because it's the one book in my collection of Christine Feehan books, that doesn't fit with the others, because it's the kind of trade paperback/mass market paperback mass up that's wider, and taller, then regular books, so it sticks out on my shelf! I don't like this fact!

So Natalya was hinted in Dark Destiny, which was Destiny and Vikirnoff's brother's book, so yeah, that she turned out to be his lifemate, that was really special, that while it took a few books to have them together, they did manage it!

I loved that while Vikirnoff had some pretty archiac ideas about how his lifemate was supposed to behave, well, that Natalya disproved them, and had fun doing so! She might be part Carpathian, and pretty old, but she's her own person, and yeah, loved that!

The part where Gregori loses his hand, and then Mikhail replaces it/heals it, that was a pretty epic scene! Not that I want Gregori to feel pain, but that Mikhail had the power to do that, as the Prince, and the Prince's right hand! So cool!

I enjoyed this book a lot, it was really great! Must reread more now!