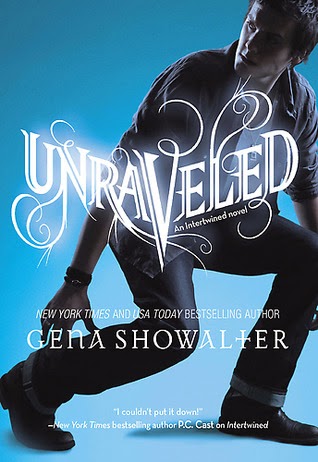 My first review of Unraveled
My Review:
I just loved rereading this book! It's just so good, it picks up on the plot lines from the first book, and yeah, things are happening! Like learning about who Julian was in his life before he became a soul in Aden's body.

So there's some complications with Aden now being the King of the Vampires. Like, for example, teh first one, Victoria's dad, isn't dead yet, which means that technically, Aden's not King. But they don't know that. But Mary Ann's ex-boyfriend does, seeing as he's recruited to spy on the group!

I liked learning about the witches, and Aden using his powers to find out more about them, that was really interesting! But then there was also the stuff with the Fae, because of course that couldn't be done yet! And we got to meet Riley' brothers!

That ending was just so good! I mean, it's been something that was started in the first book, with the death curse on Victoria, Mary Ann and Riley, and now they're having that meeting! But it didn't quite go to the witches plans!

This was such a great book, and now just to reread Twisted, before we get book 4 in 2015! I can't wait, I really want it!