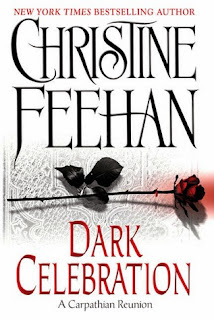 From Goodreads:
With her erotically charged Carpathian tales, Christine Feehan has enthralled a legion of fans, captivating them with a seductive world and the unforgettable characters-both human and not-who inhabit it. Now, she reunites all of them in a Dark Celebration...

My Review:
This is one of my most favourite of the Dark Saga series! It's just so fantastic, and each chapter deals with a different couple from the series, and the early ones as Mikhail goes around, which leads to some pretty hilarous situations!

Yeah, most of what I loved about this book were the hilarious moments! Like when Mikhail gets splattered with food, when he tells Gregori that he's going to be Santa Claus, which is Gregori's duty as the right hand man of the prince. And all those guys-a lot of them his brothers-are there, watching, and then are kinda forced out by Gregori. So funny!

There were also developments in this world, from babies, like Gregori and Savannah's twins, which was just so freaking cute, and the fact that they're both girls-and the other one hid from Gregory because he was too scary! That was just so cute! And future lifemate pairs, like Skylar and Dimitri, MaryAnn and Manolito! So good! Can't wait for that!

And Shea gives birth to her and  Jacques' son! Though not without a few complications, seeing as they are Carpathian, and Carpathians do have some trouble in the pregnancy/birth area. Though most other couples don't have to worry about a person trying to kill them!

Yeah, this was a really fantastic book, getting to see couples that we maybe haven't seen since their book, and brining them all together! So good! Loved it!