Week 40 Review: Through the Zombie Glass 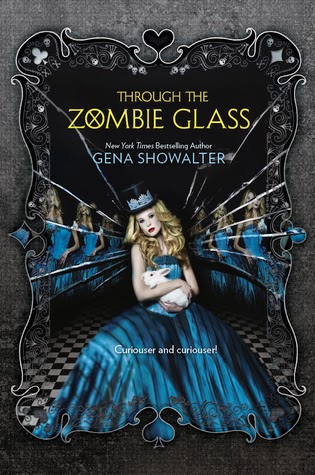 From Goodreads:
Inspired by the childhood classic Alice in Wonderland, this harrowing and romantic story features teen zombie slayer Alice Bell who has lost so much—family, friends, her home. After a strange new zombie attack, Alice fears she may be losing her mind as well. A terrible darkness blooms inside her, urging her to do wicked things. The whispers of the dead assault her ears and mirrors seem to come frighteningly to life. She’s never needed her team of zombie slayers more—including her boyfriend, Cole—than she does now. But as Cole strangely withdraws and the zombies gain new strength, Ali knows one false step may doom them all.

My Review:
Being  this world again? I give it an A+++. So all encompassing, taking in my heart, my mind, and my blood, just getting things going, and going, and just never stopping until the end, because that's when things are temporarily fixed till #3 comes along, and undoes it all over, and then it has to fix it better then ever!

One thing that I absolutely loved about these books? Their pop culture references! Or in this case, mentions of books, in Zombieland, Ali was reading the Iron Fey series over the summer, here, Trina was reading Dare You To, which just proves that both of them has great taste in books! Just loved that!

So we got to meet 2 new slayers, Gavin and Veronica, and initially, they aren't liked at all by Ali. Mostly because she has visions with Gavin, and Veronica is Cole's ex-girlfriend-right around the time that Cole breaks up with Ali, the idiot that he is, that I never thought he could be!

That she has a zombie spirit in her body, sharing it, and steadily growing stronger? And her to do lists about Zombie Ali, or Z.A.? Those were the running thing, as things developed, the list changed, till the box was checked and Z.A. was gone. Seeing as Z.A. was the one responsible for the vision that Gavin and Ali coming true!

This was such a great book, and yeah, I know that the 3rd, and I think final, book, will be just as explosive and hopeful and hurting and amazing! I can't wait!