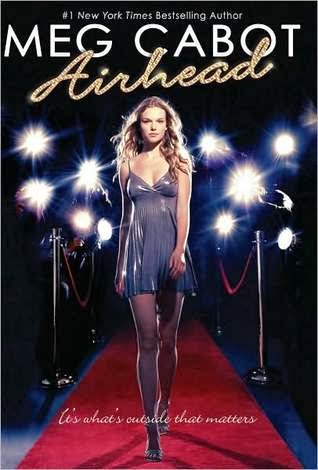 From Goodreads:
EM WATTS IS GONE.

Emerson Watts didn’t even want to go to the new SoHo Stark Megastore grand opening. But someone needed to look out for her sister, Frida, whose crush, British heartthrob Gabriel Luna, would be singing and signing autographs there-along with the newly appointed Face of Stark, teen supermodel sensation Nikki Howard.\

How was Em to know that disaster would strike, changing her-and life as she’d known it-forever? One bizarre accident later, and Em Watts, always the tomboy, never the party princess, is no longer herself. Literally.

Now getting her best friend, Christopher, to notice that she’s actually a girl is the least of Em’s problems.

But what Em’s pretty sure she’ll never be able to accept might just turn out to be the one thing that’s going to make her dream come true.

NIKKI HOWARD IS HERE TO STAY.

My Review:
Oh, this book! Major love for it, it was fun, and light besides the fact of the situation surrounding the brain transplant, and yeah, I just enjoyed reading about Em living Nikki's life! It made for some great reading time!

You really have to feel slightly bad for Em. She didn't ask for this, to be a model. And I think she did a great job with what she had, and starting to fit into this new life that was pretty much everything that she despised in her old one!

Between everybody in Em's old life, and everyone in her new one as Nikki, well, things get a bit complicated quickly! Like her learning to live a new life, her want/need to go to school, to be with Christian, and still having to do modelling gigs, there was a lot going on!

I enjoyed Lola, she was just so cute and awesome! And she had some strange ideas, but she was a good person, and yeah, I forgot what happens to her in the next 2 books, but I'm hoping for good things, she deserves them!

I enjoyed this book so much, and I can't wait to reread more!