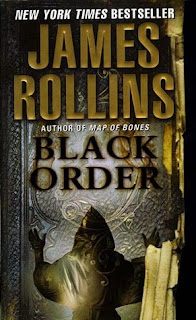 From Goodreads:
A sinister fire in a Copenhagen bookstore ignites a relentless hunt across four continents. Arson and murder reveal an insidious plot to steal a Bible that once belonged to Charles Darwin. And Commander Gray Pierce dives headlong into a mystery that dates back to Nazi Germany...and to horrific experiments performed in a now-abandoned laboratory in Poland.

A continent away, madness ravages a remote monastery in Nepal, as Buddhist monks turn to cannibalism and torture. Lisa Cummings, an American doctor investigating the atrocity, is suddenly a target of a brutal assassin. And Lisa's only ally is Painter Crowe, director of SIGMA Force, who already shows signs of the baffling malady.

Now it is up to Gray Pierce to save them both as SIGMA Force races to expose a century-old plot that threatens to destroy the current world order . . . and alter the destiny of humankind forever.

My Review:
This is a pretty important book in the series! Since it's the introduction of Lisa Cummings to the Sigma series, Lisa from Deep Fathom, and yeah, since it' her introduction, it has her and Painter meeting, and falling in love! And that's pretty important!

So the main science thing in this book, is quantum stuff. Like evolution. And yeah, how it's affecting some of these people-like the monk at the end-who was also the baby in the beginning! Yeah, that was very interesting to read!

But the sad thing is, that while this science is really incredible, and we get some really great detail-I forget most of it right away. It's just my brain can't keep those details, so yeah, that just really sucks! Because I want to learn these science-y stuff!

I really enjoyed Fiona, and I really hope she's in future books! And it was really cool how they saved Painter! I enjoyed that! And of course, the bad guys were like, total evil, and they met their match, and it was utterly deserved!

This was a really great book in the series, and now I can't wait to reread more!