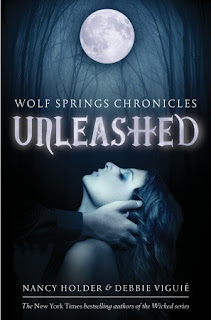 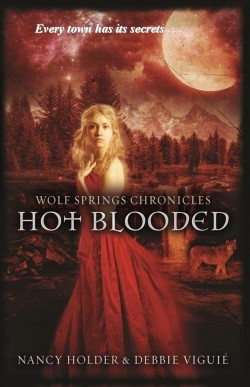 From Goodreads:
Katelyn McBride's life changed in an instant when her mother died. Uprooted from her California home, Katelyn was shipped to the middle of nowhere, Arkansas, to her only living relative, her grandfather. And now she has to start over in Wolf Springs, a tiny village in the Ozark Mountains. Like any small town, Wolf Springs has secrets. But the secrets hidden here are more sinister than Katelyn could ever imagine. It's a town with a history that reaches back centuries, spans continents, and conceals terrifying truths. And Katelyn McBride is about to change everything.

From Goodreads:
"What do you run from?"

Katelyn had only been in Wolf Springs a short time before she was bitten by a werewolf. And now she carries that creature's curse in her veins.

But she's not alone. Wolf Springs is home to a hidden family of werewolves, the Fenners - except they swear none of them bit her. Apparently there's a monster on the loose - something wild and uncontrollable.

And to make matters worse, Katelyn's struggling to resist her own animal urges. Especially around Trick and Justin. Should she follow her heart - or her instincts?

My first review of Unleashed
My Review:
I enjoyed reading both of these so much! They were so good, and entertaining, and I just loved the mystery and the characters and the world, and I can't wait for the 3rd and final book! It's going to be so good, I just know it!

So I knew/remembered a good deal of what happened in Unleashed, and yeah, just going over that again was just really great! From the creepiness of the town, and then her being bitten, and all the resulting events, yeah, it was a pretty great opener!

Then Hot Blooded! Wow! We learned a lot about the wolves, about her grandfather, about Trick, and these were things that I wanted to know! It was a really great middle book, no info dumping, but not too much or too little action, just a really nice balance!

She decided who held her heart! And the Fenner's were wary around her, but used her, and yeah, that was a pretty tense situation in the end! And a few people are dead now, which is not going to be fun! And the one that bit her is coming after her!

I just want more! I really enjoyed both, and that was such an ending that I want to know what happens next!