Week 41 Review: The Chaos of the Stars 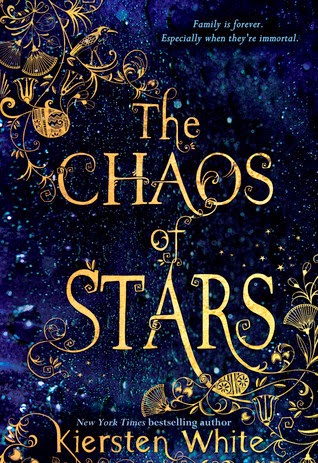 From Goodreads:
Isadora's family is seriously screwed up—which comes with the territory when you're the human daughter of the ancient Egyptian gods Isis and Osiris. Isadora is tired of living with crazy relatives who think she's only worthy of a passing glance—so when she gets the chance to move to California with her brother, she jumps on it. But her new life comes with plenty of its own dramatic—and dangerous—complications . . . and Isadora quickly learns there's no such thing as a clean break from family.

My Review:
This was such a fantastic book! I enjoyed it so much! And as a bonus, it's a book by Kiesten White, and I just adore her writing! It's just so good! And yeah, in this book, this is perfect, because of that! I just loved it!

I mean, it's not often that I read about the Egyptian gods. Well, there was Styxx, but that was only a few of them, and not really the main centre stage. And while they are a big part of this book-since family is a big part-this book is also about Isadora pretty much on her own.

I felt pretty badly for Isadora. She felt like she wasn't enough for her parents, first they choose not to make her immortal, and then they decide to have their next child early, though they've had it pretty much scheduled for every 20 years or so, and yet, they're having another baby about 4 years early!

Her relationship with Ry was really great, I really enjoyed it! Especially since as it turns out, that he's the son of the Greek deities, so he's in a similar boat as Isadora. And with her snark, yeah, they were really great to read about!

This was a really fantastic book, I enjoyed it so much, and I'd love a companion novel, to see these characters again, but not have them in conflict!