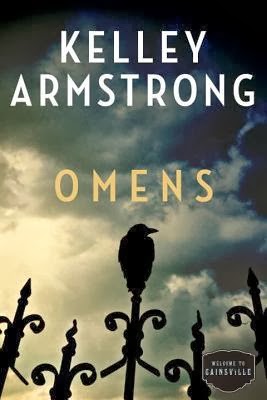 From Goodreads:
Twenty-four-year-old Olivia Taylor Jones has the perfect life. The only daughter of a wealthy, prominent Chicago family, she has an Ivy League education, pursues volunteerism and philanthropy, and is engaged to a handsome young tech firm CEO with political ambitions.

But Olivia’s world is shattered when she learns that she’s adopted. Her real parents? Todd and Pamela Larsen, notorious serial killers serving a life sentence. When the news brings a maelstrom of unwanted publicity to her adopted family and fiancé, Olivia decides to find out the truth about the Larsens.

Olivia ends up in the small town of Cainsville, Illinois, an old and cloistered community that takes a particular interest in both Olivia and her efforts to uncover her birth parents’ past.

Aided by her mother’s former lawyer, Gabriel Walsh, Olivia focuses on the Larsens’ last crime, the one her birth mother swears will prove their innocence. But as she and Gabriel start investigating the case, Olivia finds herself drawing on abilities that have remained hidden since her childhood, gifts that make her both a valuable addition to Cainsville and deeply vulnerable to unknown enemies. Because there are darker secrets behind her new home, and powers lurking in the shadows that have their own plans for her.

My Review:
This was such a great start to this series! I mean, I love Kelley Armstrong's writing, and this was a pretty hefty book, there were a lot of plot lines started, and yeah, I just can't wait to see where they'll go, because I've heard that there's going to be at least 3 books, so yeah, I can't wait for that!

I think one of my most favourite bits, were the little aside chapters, that were narrated by people now in Olivia's life, and yeah, were really interesting, hinting, or almost all-out telling, that there was something going on, and yeah, I just want to know more about that!

It was a bit confusing keeping everyone and everything tracked, and together, but as the book went on, it focused a bit more on the mystery, and seeing as there was Gabriel, well, yeah, that's always going to be a situation! I just loved reading about Gabriel, like when he messed up pretty bad with Olivia with the reporter and all!

Yeah, that ending was quite a bit creepy. I mean, that they were that close to the bad guy, and with all these omens that she's seeing, and is starting to really interrupt, like, not just the sayings that go with them, yeah, that was a really great ending!

I just loved this book so much, it was really entertaining, and I can't wait for Visions!