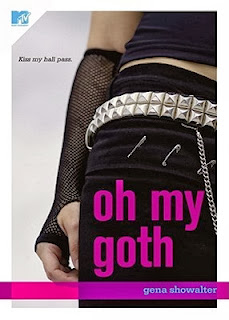 From Goodreads:
A fiercely individualist Goth girl wakes up to discover that the whole world has gone Goth and she's actually -- gag -- popular.

Jade Leigh is a nonconformist who values individuality above all else. She has a small group of like-minded Goth friends who wear black, dabble in the dark arts, and thrive outside the norm. They're considered the "freaks" of their high school. But when Jade's smart mouth lands her in trouble -- again -- her principal decides to teach her a lesson she'll never forget.

Taken to a remote location where she is strapped down and sedated, Jade wakes up in an alternate universe where she rules the school. But her best friends won't talk to her, and the people she used to hate are all Goth. Only Clarik, the mysterious new boy in town, operates outside all the cliques. And only Mercedes, the Barbie clone Jade loathes, believes that Jade's stuck in a virtual reality game -- because she's stuck there, too, now living the life of a "freak." Together, they realize they might never get back to reality...and that even if they do, things might never be the same.

My first review of Oh My Goth
My Review:
This was a really fantastic book! I just enjoyed rereading it so much! Jade was just such a personality, strong and tough, not a threat to others tough, but standing up for what she believed in tough. And I just loved reading about her and her adventures!

Just the idea of being plopped into a world where the values are pretty much the opposite of your world, but that you're still the same? Not a pleasant thing, seeing as her dad approves of Jade, pretty much everyone' Goth, too, and her friends from her world, are the ones that wouldn't like the non-Goths. So basically,  Jade and Mercedes switched friends in the world change!

So this book had the mystery, of how to get out of her. Because it can't be the real world. And that's where Clarik kinda comes in. Because he's also a love interest! But he's also connected to those that are doing this to them.

I would really love a sequel, of some more people going through this, because I really liked Jade, and I wouldn't want her to go through something like this again, but there were some people in her school that need it! And some people around the world!

This was such a great book, I enjoyed it so much!