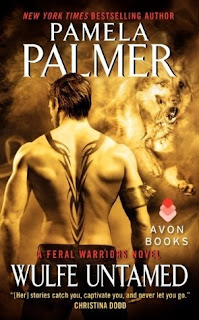 From Goodreads:
They are called Feral Warriors—an elite band of immortals who can change shape at will. Sworn to rid the world of evil, consumed by sorcery and seduction, their wild natures are primed for release...

The most enigmatic and tortured of the Feral Warriors, Wulfe is haunted by the quiet beauty of a human woman who no longer remembers him. Once a captive of both the Mage and the Ferals, Natalie stole a piece of his heart before he took her memories and sent her safely back to her fiancé. But now the Mage are threatening her again, and Wulfe will risk anything to protect her.

Natalie Cash is stunned when she's saved by a wolf who shifts suddenly into a splendidly built, if badly scarred, man, a man with the kindest eyes. Swept into a world of intrigue and danger beyond her comprehension, she turns to the powerful Wulfe, finding a passion she'd only dreamed of. But when time runs out, they must trust one another and surrender to a wild, untamed love.

My Review:
I just loved reading this book! For now, it's the end of the series, but on Pamela Palmer's website, it mentions that she is planning on writing further stories in this world. But for now, this is the last that we have. And I enjoyed it so much!

Natalie and Wulfe's book has been set up since Rapture Untamed, when Natalie and her friends were kidnapped by the Mage. And for them to finally have their story, yeah, I was really excited to read it! And it didn't disappoint!

In this book, we learn so much about this world! Like that the daimons were like the mages-a mix of good and bad, but having a leader be bad, and take control. Which is why Wulfe's daimon blood isn't bad, because his ancestor-who he meets!-was a good and honorable guy!

This is the end of this story arc. Satanan was freed-if briefly. And from the epilogue of this book, any future books are probably going to deal with the other bad guys that were released, but weren't put back. I can't wait, Vhyper and Griff, and the other Feral Warriors without mates, deserve happiness!

Loved reading this book, it was so fantastic! I hope that the new books in this series come soon!