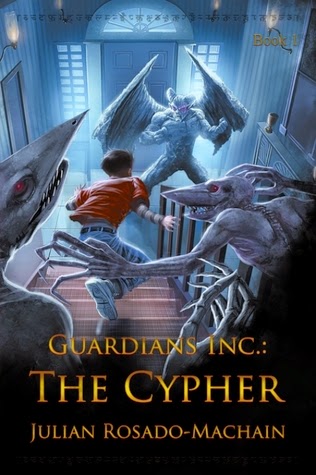 From Goodreads:
GUARDIANS INC.: THE CYPHER is two stories in one. A glimpse into a multinational company that is in reality the oldest of secret societies, one that spans close to seven thousand years of existence, weaving in and out of history, guiding and protecting humanity from creatures and forces that most of us believe are only mythology and fairy tales.

The other is the story of Thomas Byrne, a young man thrust into secrets he shouldn't be aware of and dangers he shouldn't face but, that he ultimately will, for he is a Cypher. The only one who can steer humanity’s future.

The ultimate conspiracy theory is that Magic is real. Kept in check by technology but, every five hundred years the balance can shift and, if it does, technology will fail and those creatures we've driven into myth will come back with a vengeance.

To protect the present, Guardians Incorporated needs to know the future.

My Review:
This was a pretty spectacular book! Fun, enjoyable, and not just a little bit weird, with pretty great characters, an interesting world, and great-to-read writing! Plus, the initial idea of an ancient conspiracy theory, just fantastic!

I enjoyed this world, with it's quirks, like the big one of the 500 possible power shift, to the small ones that are almost too numerous to count! Because yeah, this is a book with magic, at least, the possibility of magic, since technology is the side that's been in charge for the current 500 years.

The characters? They had their own quirks, too, they were individual, fun, interesting, and they had some pretty awesome plot twists, and yeah, it was a lot of fun to read about them, and in future books, because they're characters worth knowing!

Yeah, I really enjoyed this book, it was awesome, and I hope that I can read more of the series, what with the teaser of the second book in this one! 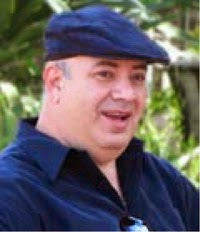 Bio:
Julian Rosado-Machain has enjoyed pizza in three continents, worked in graphic design, armored vehicles, built computers, handcrafted alebrijes and swears that he has seen at least one ghost.

He lives in San Diego, California. And enjoys the sun with his wife, three children and cat.
His latest book is the YA fantasy adventure, Guardians Inc.: The Cypher. 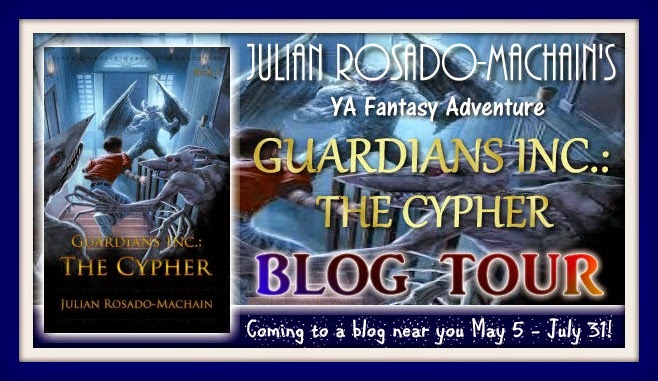 Thursday, May 8
Interview at The Writer’s Life

Monday, May 12
Book Featured at Laurie’s Paranormal Thoughts and Reviews

Tuesday, May 13
Interview at As the Page Turns

Wednesday, May 14
Guest Blogging at The Book Faery Reviews

Thursday, May 15
Book Review at The Gal in the Blue Mask

Wednesday, May 21
First Chapter Review at The Children’s and Teens Book Connection

Monday, May 26
Interview at Beyond the Books

Tuesday, May 27
Guest Blogging at I Heart Reading

Friday, May 30
Interview at Review From Here

Monday, June 9
Book Review at The Road to Here

Tuesday, June 10
Guest Blogging at The YA Lit Chick

Monday, June 16
Book Trailer Feature at If Books Could Talk

Tuesday, July 8
Character Guest Post at As the Page Turns

Tuesday, July 22
Interview at Between the Covers

Wednesday, July 23
Guest Blogging at The Story Behind the Book

Thursday, July 24
Interview at As the Page Turns

Thursday, July 31
Book Review at A Room Without Books is Empty
Book Tour Highlights at PUYB Virtual Book Club
Posted by Louisa @ Words I Write Crazy at 12:00 AM