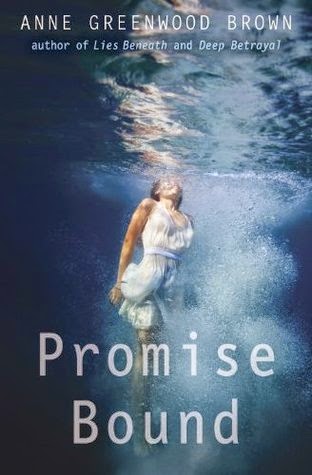 From Goodreads:
Calder and Lily never imagined falling in love would mean breaking apart. But ever since Lily started wearing a glass pendant that once belonged to Nadia, Calder's adoptive mother, she's been having vivid dreams of what life was like for the mermaid matriarch. In fact, she's been dreaming as if she were Nadia! And Nadia, it seems, made a promise before her death. A promise to reunite Calder's biological mother with her son. Lily knows merfolk are bound to keep their promises. Calder's not buying into it, though. He chalks up the dreams to stress. He wants Lily to focus on the future—their future, not the past. Which forces Lily to send Calder away. Calder goes, feeling rejected and more than a little tempted to revert to his hunting ways.
What both of them overlook is the present: Calder's sisters, Maris and Pavati, are fighting for control of the mermaid clan, and now that Lily and her dad have transformed into mer-creatures, both mermaids vie for daughter and father as allies. Which of the two mermaids can be trusted? Will Lily make costly mistakes, forcing her to descend to the depths of Lake Superior? And if Calder returns, will he be the same merman Lily grew to love? The stakes are high, with many lives at risk, but Calder and Lily must confront the past as well as their darkest impulses if they want a chance at being together.

My Review:
Oh, this was a pretty spectacular end to the series! And it dealt with a question that was kinda lingering in the back of readers minds-who were Calder's human parents? And we find out the answer, and yeah, that was a pretty interesting discovery!

The knife, from the 2nd book, and how the sister thought that it was somehow used in connection to Jack's death, I wonder why Lily didn't tell the truth about that, because it didn't have anything to do with Jack's death. Like, nothing at all except that it was a mermaid that killed him, and the knife is a mermaid artefact. And that's a thin connection at best.

I felt so sorry for Calder and Lily, how basically Nadia is keeping them apart, by keeping Lily up till she got Calder to fulfil the promise Nadia made to Calder's human mom, and yeah, he had to leave to go deal with that, not too fun.

While there were things that I wish that we'd gotten, like how what's her name dealt with it, Jack's sister, and the reactions to the ending, basically, I wish that it was longer, because yeah, I want to know more about the after effects of what happened, because I'm pretty sure Pavati's love got turned into a merman!

Yeah, this was just a really great book, and while I'm sad that it wasn't longer, it was still freaking good!