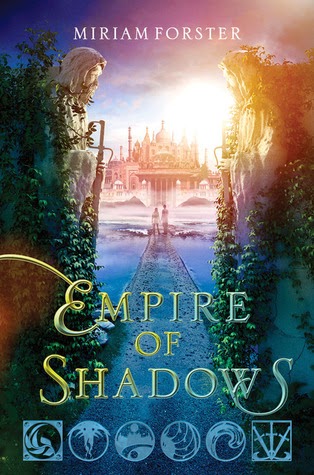 From Goodreads:
Cast out of her family three years ago, Mara turned to the only place that would take her—a school where students train to protect others. But Mara is stunned when guarding a noble girl in the Empire's capital turns out to be more dangerous than she could've imagined. More shocking still, she finds the boy she thought she had lost forever outside the gates of her new home.

Mara knew her life in the dizzying Imperial city would hold dangers. How could she have known that her heart, as well as her life, would be at stake?

Empire of Shadows will take readers on a spellbinding journey into the world Miriam Forster first introduced in City of a Thousand Dolls—a world with a divided society, deadly courtiers, heroic traitors, and deeply laid conspiracies.

My Review:
This was such an incredible book! And warning, there are going to be spoilers in this review because I need some outlet for this!!! Any ways, I just loved this book, it was the story of Mara and Emil, and the people that they meet as this book goes on!

The story begins with an injured girl, who goes up to a building that holds an order dedicated to getting back lost honour. A girl who chooses the name Mara. And then trains for the next 3 years before the book really begins, and she looks for someone to protect.

I really enjoyed this book, and how it's connected to City of A Thousand Dolls, and for most of the book, I thought that it was set afterwards, but it's not, because Mara, whose first name as in first name she was ever called, was Shar, and Emil, are Nisha's parents. And this is their story!

I was pretty clueless, and I blame my poor memory, that I didn't connect the dots, from this book to City, because when I look back, those details were there from the very beginning, but I didn't get them because I forgot those details from before!

I just really loved this book, and it's ending is where City begins, and I want to know what happened to them!