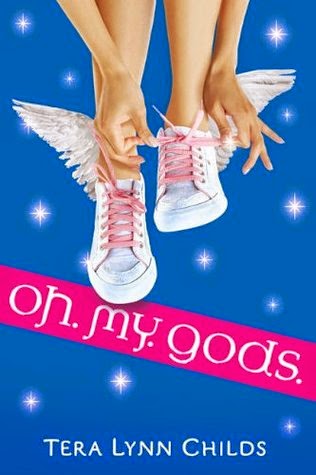 From Goodreads:
When Phoebe's mom returns from Greece with a new husband and plans to move to an island in the Aegean Sea, Phoebe's well-plotted senior year becomes ancient history. Now, instead of enjoying a triumphant track season and planning for college with her best friends, Phoebe is trying to keep her head above water at the exclusive Academy. If it isn't hard enough being the new kid in school, Phoebe's classmates are all descendants of the Greek gods! When you're running against teammates with superpowers, dealing with a stepsister from Hades, and nursing a crush on a boy who is quite literally a god, the drama takes on mythic proportions!

My Review:
Oh, this was just such a fantastic book, nice, funny, and just relaxing, because being schooled on a private island that's supposed to be solely for the descendants of the greek gods is the new normal, and problems are on that scale.

For example a mix up on different chats, sending something meant for a classmate-new-friend, to a friend from California, and having said friend start to dig a bit into the secrets of the island. And while it could've been a lot worse, that was on of the big conflicts.

The other was the romance. Griffin, for about half of the book, was something of an ass. Half of that ass-ness was that he did like Phoebe, and lost control of his powers, the other half, was a bet that he made with his (became-ex) girlfriend and Phoebe's new stepsister, Stella. Yeah.

But they did have a pretty great romance as they worked through that, because yeah, they were pretty great together, made this book a page turner, till I was finished it in about an hour and a half, max. (I don't know the exact time it took, because I wasn't exactly looking at a clock, and I was interrupted to work)

Yeah, this was an awesome book, and now I have to read the 3 short stories, the 2nd book, and the novella!