Week 23 Review: V is for Villian 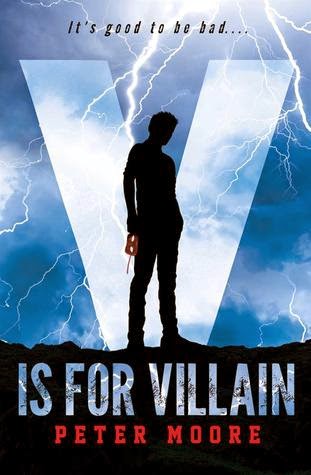 From Goodreads:
Brad Baron is used to looking lame compared to his older brother, Blake. Though Brad's basically a genius, Blake is a superhero in the elite Justice Force. And Brad doesn't measure up at his high school, either, where powers like super-strength and flying are the norm. So when Brad makes friends who are more into political action than weight lifting, he's happy to join a new crew-especially since it means spending more time with Layla, a girl who may or may not have a totally illegal, totally secret super-power. And with her help, Brad begins to hone a dangerous new power of his own.

But when they're pulled into a web of nefarious criminals, high-stakes battles, and startling family secrets, Brad must choose which side he's on. And once he does, there's no turning back.

Perfect for fans of The Avengers, Ironman, and classic comic books, V is for Villain reveals that it's good to be bad.

My Review:
Oh, how I loved this book! It was really amazing, and I can't believe how long it took me to get around to actually reading it! I was sucked into this world where in the 50's, people were experimenting with genes, and then came the people with powers!

I loved the footnotes, not on every page, but when Brad wanted to say something, he was in about a year after this book place, so he was sometimes adding comments of things that were related to what just happened, or just just plain comments explaining things, like terms, or his brother, because yeah, Blake said a lot of stupid things.

But then there's that twist with Blake, and Brad, that we get near the end, well, then technically, that's 2, but they were both pretty shocking! And then add onto it, that there was some mystery to their dad's death, that's one reason why I want another book!

Another reason is that there was a lot of injustice in this book, from the way the teachers were, to the point when Brad was almost killed, they were worried about the future of the guy that did that to him. And Brad was going to work on fixing it.

Yeah, there really has to be a sequel, I desperately want to know what's going to happen after this epic and awesome book!!