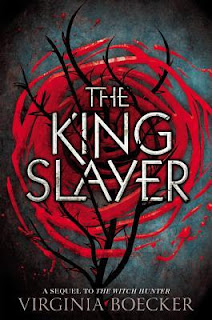 From Goodreads:
"I think, in time, you'll either be my greatest mistake or my greatest victory."

Former witch hunter Elizabeth Grey is hiding within the magically protected village of Harrow, evading the price put on her head by Lord Blackwell, the usurper king of Anglia. Their last encounter left Blackwell ruined, but his thirst for power grows stronger every day. He's readying for a war against those who would resist his rule--namely Elizabeth and the witches and wizards she now calls her allies.

Having lost her stigma, a magical source of protection and healing, Elizabeth's strength is tested both physically and emotionally. War always means sacrifice, and as the lines between good and evil blur once more, Elizabeth must decide just how far she'll go to save those she loves.

My Review:
I just devoured this book, it was just so freaking good! I enjoyed so much about it, from seeing these characters again, dealing with the affects of the previous book, and yeah, reading Virginia Boecker's writing again!

This book picks up pretty soon after The Witch Hunter. Elizabeth's been healing from the events, and is now ready for her trial. And that brings up some complications, because the bad guys are getting into Harrow, and that's not a good thing!

We learned more about the stigma, and yeah, that was a bit creepy! And that it was now in John, and how it was affecting him...that was a bit hard to read! But it allowed for some planning and ideas to defeat Blackwell and his army!

Really enjoyed the ending of this book! It was hard, there were some losses, but Blackwell was defeated, and that's the main thing, even through the mourning! Though I'm kinda wondering, what happened to the Revenants that Blackwall made, like Caleb? Did they disappear or what? I've already forgotten if there was a mention of them!

Loved reading this book, it was so great, and I can't wait to read more by Virginia Boecker!