Week 29 Review: Mark of the Demon 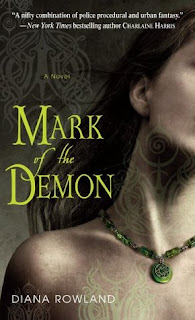 From Goodreads:
Cop and conjurer of demons, she's a woman in danger of losing control—to a power that could kill....

Why me? Why now? That's what Beaulac, Louisiana, detective Kara Gillian was asking herself when an angelic creature named Rhyzkahl unexpectedly appeared during a routine summoning. Kara was hoping to use her occult skills to catch a serial killer, but never had she conjured anything like this unearthly beautiful and unspeakably powerful being whose very touch set off exquisite new dimensions of pleasure. But can she enlist his aid in helping her stop a killer who's already claimed the lives—and souls—of thirteen people? And should she? The Symbol Man is a nightmare that the city thought had ended three years ago. Now he's back for an encore and leaving every indication on the flesh of his victims that he, too, is well versed in demonic lore.

I really enjoyed this world of Summoners. There were the 12 levels of demons, which had weird names, and were a bit confusing, but hey, I'm not the summoner, so I don't need to know the names, only that 7 and up have wings. And the circles of convergence and being able to summer higher level demons!

Kara was really awesome to read about! She was a loner because she's a Summoner, and she's a cop. So there were those kinda conflicting interests-loner and protect the people, which means she has to be around them. Really enjoyed how she solved the mystery, and who the bad guy was!

Ryan and his potential, we're going to learn more about that in books 5 and 6, I believe, from reading the synopsis' of those books. And I wonder if that's going to tie into the whole being a Summoner has a genetic element-did the demons impregnate humans, and those babies and their descendants have the ability to be Summoners? And the fact that Kara is holding a baby on the cover of Vengeance?

Yeah, I have a lot of questions, and I want to know whats going to happen next so yeah, I can't wait to read more! Especially with her aunt and the Demonic Lord! I want more!