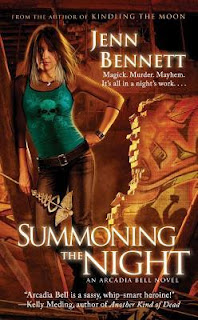 After narrowly escaping her fate as a sacrificial scapegoat, Arcadia Bell is back to normal. Or at least as ordinary as life can be for a renegade magician and owner of a tiki bar that caters to Earthbound demons. She's gearing up for the busiest day of the year—Halloween—when a vengeful kidnapper paralyzes the community. The influential head of the local Hellfire Club taps Cady to track down the fiendish bogeyman, and now that she’s dating red-hot Lon Butler, the Club's wayward son, she can hardly say no.

Cady and Lon untangle a gruesome thirty-year trail of clues that points to danger for the club members; children. But locating the person behind the terror will require some metaphysical help from Cady's loyal bar patrons as well as her potent new Moonchild powers—and she'd better figure it out before the final victim disappears and her own darkest secret becomes her biggest enemy.

My Review:
Loved reading this book! I savored it, because hey, there's only a novella and 2 books left in the series. So while it's not a very long series, it's one that I'm really enjoying, and I'm taking it all in and enjoying it!

This book had a bit of a similar layout, that there was a mystery for her to solve, and there was magic stuff going on. But she was also learning about her Moonchild powers, and yeah, it was just so freaking great to read!

Of course these characters were really fantastic to read about, Cady and her insecurities and growth, Lon, enough said, and Jupe, who was just hilarious, from his motormouth and blurting things out that usually don't get said, like repeating what others have said, or things that were banned but done anyways!

I enjoyed how things worked out, it wasn't the easiest, but they did make it, and there's always tomorrow to make things better then they are today! But yeah, someone who does that to kids...really great ending!

Such a great book, and again, I'll try to squeeze in the next few-and last few-books in August! I just really want to read them!