Week 31 Review: Blood of the Demon 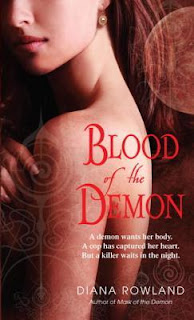 From Goodreads:
BETWEEN HEAVEN AND HELL, MAN AND DEMON, SHE'S ABOUT TO FACE THE ONE THING SHE MAY NOT BE ABLE TO SURVIVE.

Welcome to the world of Kara Gillian, a cop with a gift. Not only does she have the power of "othersight" to see what most people can't even imagine, but she's become the exclusive summoner of a demon lord. Or maybe it's the other way around. The fact is, with two troublesome cases on her docket and a handsome FBI agent under her skin, Kara needs the help of sexy, insatiable Lord Rhyzkahl more than he needs her. Because these two victims, linked by suspicious coincidence, haven’t just been murdered. Something has eaten their souls.

It's a case with roots in the arcane, but whose evil has flowered among the rich, powerful, and corrupt in Beaulac, Louisiana. And as the killings continue, Kara soon realizes how much there's still to learn about demons, men, and things that kill in the night—and how little time she has to learn it.

My Review:
I just absolutely loved reading this book! The first was so enjoyable, and I just really enjoyed this book! It was so awesome to spend more time with these characters and in this world! It's only the second book, but a lot has happened, and yeah, so great to read!

This book was pretty dark! There was dealing with the aftereffects of the past book, with her aunt's essence somewhere not in her body. And that Kara had been thought dead for 2 months. Yeah, those were kinda big things!

And essences were a pretty big thing in this book, seeing as someone or something was eating them. Besides that it was all pretty horrible, that's going to lead to some consequences in the future from the lack, in population numbers and overall health. Which sucks.

Really enjoyed how everything came together! There was a lot to learn, and not a lot of time to learn it, and dealing with everything was not easy! But she did it, and it worked out pretty well in the end, besides a few things!

Loved reading this book, and I can't wait to read the next book, though I'll probably have to, since August is for reading ARC's! But maybe, hopefully, I can squeeze in a few regular books!