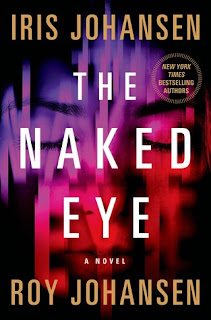 From Goodreads:
ONLY ONE WOMAN CAN SEE...
Kendra Michaels was instrumental in bringing serial killer Eric Colby to justice. And despite his apparent execution at San Quentin, Kendra is convinced that Colby is still alive. The problem is that she can't prove it. Even her razor-sharp powers of observation-developed to an amazing capacity during the twenty years she spent blind, and now in constant demand by law enforcement agencies-have gotten her nowhere.

THAT A KILLER IS HIDING IN PLAIN SIGHT
But then a reporter who very publicly humiliated Kendra is murdered. Visiting the crime scene in search of anything that might link the brutal homicide to Colby, Kendra instead finds evidence that points to her. Finally, Colby's master plan becomes clear to her: he is framing Kendra for murder. Suspicions mount and Kendra dives into a lethal mission to clear her name and catch the killer no one believes exists anymore. A killer who is always nearby, watching...whose trail of destruction is invisible to the naked eye...and whose intentions only Kendra can see.

My Review:
Yeah, it was great to read this book! It's another new Kendra story, and a really addicting one at that! And as another bonus, it has Beth and Eve! That was just fantastic, and it was just so enjoyable to read! Loved it!

I'm really glad that I read this book so soon after reading Sight Unseen-they were something of a duology, dealing with Colby. So yeah, reading them so close together kept the details fresh, and made for a better read!

Colby was pretty horrible in this book. Of course, in the previous book, he was in prison besides when she was remembering his previous crimes. And now, he's had that time to plan how he wants to hurt her. And he does a pretty good job at that. But she does a better one at beating him!

It was a satisfying end. They'd been kinda entwined for these two books, because of what had happened, and was happening. But this ending finished that off, and she beat him. Basically, what every reader was rooting for!

Loved reading this book, it was so awesome, and I can't wait to read Night Watch!