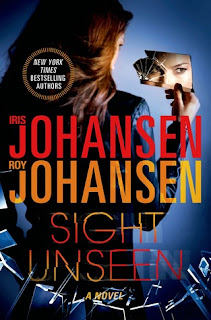 From Goodreads:
She was safe in a world of darkness.
Now danger threatens in the cold light of day…Before the experimental surgery that gave her sight, Kendra Michaels developed her other senses to an amazing capacity. Now she can identify a Nissan by the sound of its engine, a Norelco electric razor by the pattern of stubble it leaves behind, or an obscure colorless fire accelerant by its sweet smell. Law enforcement agencies clamor for her rare powers of perception and observation, too often disrupting the life she has built helping others through music therapy. Because so very often, only Kendra can get the job done.

But in this case, it's Kendra who first realizes that the apparent traffic accident on San Diego's historic Cabrillo Bridge is in fact a murder scene, and she rushes to alert the police before crucial evidence is destroyed. As the body count rises and one murder unveils another, a gruesome pattern emerges. Someone is killing people in ways that mirror Kendra's most notorious cases. She has a fan: someone who admires her work and is twisted enough to show that admiration through murder--while naming himself after the biggest art forger of the 20th century. He views himself not as a monster but as an artist. And he is not working alone.

In Iris Johansen's Sight Unseen, as the darkness closes in, near enough to touch Kendra and those she loves, Kendra must come face to face with her greatest fears--and her most ruthless enemy. A man who moves through the shadows, a man she may even know, who hides behind the mask of sanity, sight unseen.

My Review:
Yeah reading this book! It's been so long since I read a new Kendra Michaels story (just like with Catherine!) and I just devoured it, it was so great and enjoyable! And yeah that there's still more to come, I can't wait to read them!

It was really great to see Kendra and Lynch work together again! Of course, the circumstances weren't the best-a "fan" of Kendra's investigative work replaying her cases. And we got to see her go out on her first case-because Colby is helping the current murderer. Yeah.

Really enjoyed the mystery, of this guy who is pretty precise, and all these cases of hers that he replicated. And then the whole Colby thing. That was pretty vicious! And knowing that he's still out there, free, that's a pretty horrible thought! But I know he'll be caught and/or killed in The Naked Eye, though not after causing a lot of trouble!

There was one really hilarious text exchange between Kendra and Lynch. Just utterly hilarious, and shows where they were at that point in their relationship, teasing about her being sick because of him, or because he's gone, yeah, that was great!

This book was just fantastic, and I can't wait to read more!