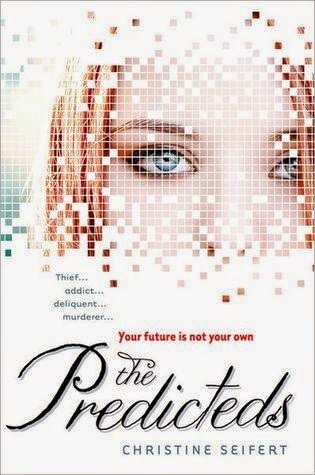 From Goodreads:
Daphne is the new girl in town and is having trouble fitting in. At least she has Jesse… sort of. He wants to be more than "just friends," but there's something he's not telling her about his past. Something dangerous. When a female student is brutally attacked, police turn to PROFILE, a new program that can predict a student's capacity for violent behavior, to solve the case. As the witch hunt ensues, Daphne is forced to question her feelings for Jesse—and what she will do if her first love turns out to be a killer.

My Review:
So fantastic to read this book! It was real, and people were flawed! I enjoyed it so much, and I can't believe that it took me so long to getting around to reading it! I know I read a lot of books, but this one was just so easy to read and so enjoyable!

For some reason, I thought that this was set in the future. And apparently, I'm not alone in that, it's shelved in dystopia. But it's set around now, with school shooting. And PROFILE, which doesn't seem like something we can't have right now. So that was a good shock!

The way that people jumped on the PROFILE/predicted bandwagon, and wouldn't listen to the fact that maybe it's a bit early to do so because it's a new thing, wasn't really surprising. Things like school shootings scare people, and when people are scared, well, they're not the most rational! But it was still really frustrating, because it did a lot of damage!

There was two big things wrapped around the social commentary-romance and mystery. There was Jesse who acted oddly, and was a bit violent sometimes, but he was a pretty great guy. And then there was whoever beat up January. And I really enjoyed who it turned out to be, that wasn't expected!

Really enjoyed this book, so glad that I finally read it, it was really amazing!