Week 40 Review: The Boy is Back 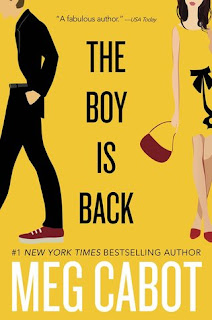 From Goodreads:
From New York Times bestselling author Meg Cabot comes the sweetly humorous story of a man who has to face his past in order to find his future.

One post. That's all it took to destroy the care free, glamorous life of pro golfer Reed Stewart. One tiny post on the Internet.

Then again, it's not like Reed’s been winning many tournaments lately, and his uncle isn't the only one who says it's because of the unfinished business he left behind back home in Bloomville, Indiana—namely Reed’s father, the Honorable Judge Richard P. Stewart, and the only girl Reed ever loved, Becky Flowers.

But Reed hasn't spoken to either his father or Becky in over a decade.

Until that post on the Internet. Suddenly, Reed's family has become a national laughingstock, his publicist won't stop calling, his siblings are begging for help, and Reed realizes he has no other choice: He's got to go home to face his past . . . the Judge and the girl he left behind.

Becky's worked hard to build her successful senior relocation business, but she's worked even harder to forget Reed Stewart ever existed—which hasn't been easy, considering he's their hometown's golden boy, and all anyone ever talks about. It was fine while they were thousands of miles apart, but now he's back in Bloomville. She has absolutely no intention of seeing him—until his family hires her to help save his parents.

Now Reed and Becky can't avoid one another…or the memories of that one fateful night.

My Review:
I just absolutely loved reading this book, and I'm so thankful that I got a chance to read it early! It's a Meg Cabot book, and they are always awesome, and yeah, it was a sequel to this series that's loosely connected, so it can go all over-New York, Italy, and Bloomville!

For me, there's two big meanings to the title. The boy character, Reed, comes home after a long time. But it also means that the Boy series is back, even if it's just for this book. And I'm glad t hat it is, because this book was just fantastic!

Technology has changed since the first 3 books were published, and with it, the way that people communicate. Sure, Every Boy Wants One communicated with texts-but with BlackBerry's, while it was probably iPhones in this book, as well as apps. So that was pretty awesome to read! I also loved the interview on the recording device-it was an awesome way for the story to be told, and the story that it told, oh!

I loved Reed and Becky's story, from when they were teens, to dealing with everything that's going on now that they're adults. There was a bit of a mystery, but it wasn't a big thing until it was, hiding from casual eyes, but then becoming bigger! Plus there was the romance! Loved reading it so much!

This book was just so excellent, and I don't mind if there's a sequel or not, as I said, this series is loosely connected, and there could be any amount of stories that could still be told!