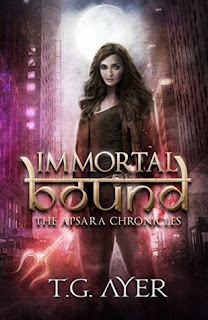 From Goodreads:
Against the rising horde of the underworld, the gods have one weapon: Vee Shankar. Special Agent. Supernatural CSI.

Beneath New York's cosmopolitan veneer lies a darker truth--a concrete jungle of the supernatural kind. But humanity is protected, their souls guarded by ancient and powerful Hindu Gods.

She doesn't know it, but Vee's power means more than just a quirk of her DNA. Her true identity is a secret better left untold. But as both her alliance with a mystery informant and her strange powers grow, Vee must confront a truth that will make her question her very existence.

Before all hell breaks loose.

My Review:
I was really hooked by the synopsis, I thought that it sounded very good. So yeah, I was really excited to read this book. Vee was a great character, smart and stubborn, and it was really great to read about her adventures!

I enjoyed this book, but it's not my favourite of her books. The problem was, that the Hindu gods, I don't know much about them, besides V and ish in their names. So a lot of names were introduced and I was totally confused, trying to keep track of them. Sure, most of them were mainly just mentioned, but still, they caused some confusion!

The relationship that Vee had with her remaining family, her grandmother and step-dad (though her mom's still alive, that relationship isn't as good) they were very tight knit, living in the same house. Of course the bad guys totally disrupt everything!

This book is only the beginning of the series, so there will be other mysteries to solve, thought hopefully not as personal as this one was, with her grandmother being kidnapped and her eventual fate. So yeah for more books!

This book was really good, it just wasn't the most wonderful book in the world for me. Which is OK, not every book is for every person!