Week 16 Reviews: Victory of Eagles, Tongues of Serpents, Crucible of Gold, Blood of Tyrants, League of Dragons, His Majesty's Dragon 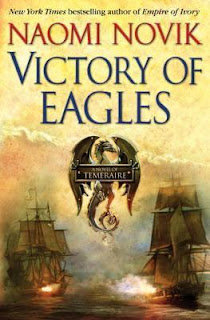 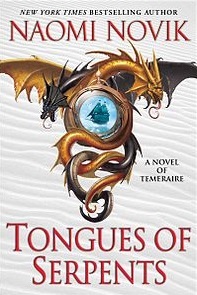 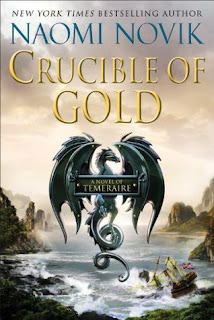 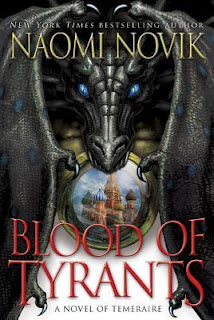 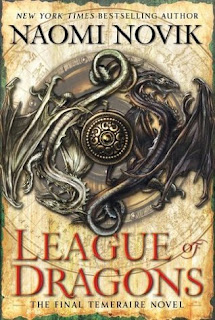 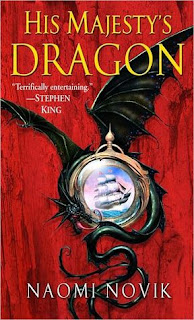 From Goodreads:
Naomi Novik's triumphant debut, His Majesty's Dragon, introduced a dynamic new pair of heroes to the annals of fantasy fiction: the noble fighting dragon Temeraire and his master and commander, Capt. Will Laurence, who serves Britain's peerless Aerial Corps in the thick of the raging Napoleonic Wars. Now, in the latest novel of this dazzling series, they soar to new heights of breathtaking action and brilliant imagination.

It is a grim time for the dragon Temeraire. On the heels of his mission to Africa, seeking the cure for a deadly contagion, he has been removed from military service–and his captain, Will Laurence, has been condemned to death for treason.

Separated by their own government and threatened at every turn by Napoleon's forces, Laurence and Temeraire must struggle to find each other amid the turmoil of war and to aid the resistance against the invasion before Napoleon’s foothold on England’s shores can become a stranglehold.

If only they can be reunited, master and dragon might rally Britain's scattered forces and take the fight to the enemy as never before–for king and country, and for their own liberty. But can the French aggressors be well and truly routed, or will a treacherous alliance deliver Britain into the hands of her would-be conquerors?

From Goodreads:
Convicted of treason despite their heroic defense against Napoleon's invasion of England, Temeraire and Capt. Will Laurence have been transported to a prison colony in distant Australia—and into a hornet's nest of fresh complications. The colony is in turmoil after the overthrow of military governor William Bligh—aka Captain Bligh, late of HMS Bounty. And when Bligh tries to enlist them in his bid to regain office, the dragon and his captain are caught in the middle of a political power struggle.

Their only chance to escape the fray is accepting a mission to blaze a route through the forbidding Blue Mountains and into the interior of Australia. But the theft of a precious dragon egg turns their expedition into a desperate recovery operation—leading to a shocking discovery and a dangerous new complication in the global war between Britain and Napoleon.

From Goodreads:
Former Aerial Corps captain Will Laurence and his faithful dragon, Temeraire, have been put out to pasture in Australia--and it seems their part in the war has ended just when they are needed most. The French have invaded Spain, forged an alliance with Africa's powerful Tswana empire, and brought revolution to Brazil.

With Britain's last desperate hope of defeating Napoleon in peril, the government that sidelined Laurence swiftly offers to reinstate him, convinced that he's the best man to enter the fray and negotiate peace. So the pair embark for Brazil, only to meet with a string of unmitigated disasters that forces them to make an unexpected landing in the hostile territory of the Incan empire.

With the success of the mission balanced on a razor's edge, an old enemy appears and threatens to tip the scales toward ruin. Yet even in the midst of disaster, opportunity may lurk--for one bold enough to grasp it.

From Goodreads:
Shipwrecked and cast ashore in Japan with no memory of Temeraire or his own experiences as an English aviator, Laurence finds himself tangled in deadly political intrigues that threaten not only his own life but England's already precarious position in the Far East. Age-old enmities and suspicions have turned the entire region into a powder keg ready to erupt at the slightest spark—a spark that Laurence and Temeraire may unwittingly provide, leaving Britain faced with new enemies just when they most desperately need allies instead.

For to the west, another, wider conflagration looms. Napoleon has turned on his former ally, the emperor Alexander of Russia, and is even now leading the largest army the world has ever seen to add that country to his list of conquests. It is there, outside the gates of Moscow, that a reunited Laurence and Temeraire—along with some unexpected allies and old friends—will face their ultimate challenge...and learn whether or not there are stronger ties than memory.

Naomi Novik's beloved Temeraire series, a brilliant combination of fantasy and history that reimagines the Napoleonic wars as fought with the aid of intelligent dragons, is a twenty-first-century classic. From the first volume, His Majesty's Dragon, readers have been entranced by the globe-spanning adventures of the resolute Capt. William Laurence and his brave but impulsive dragon, Temeraire. Now, in Blood of Tyrants, the penultimate volume of the series, Novik is at the very height of her powers as she brings her story to its widest, most colorful canvas yet.

From Goodreads:
The final adventure in the New York Times bestselling Temeraire series that started with the beloved His Majesty's Dragon which has won fans of Napoleonic-era military history, Anne McCaffrey's Pern novels, and Patrick O'Brian's seafaring adventures.

The deadly campaign in Russia has cost both Napoleon and those allied against him. Napoleon has been denied his victory…but at a terrible price. Lawrence and the dragon Temeraire pursue the fleeing French army back west, but are demoralized when Napoleon makes it back to Paris unscathed. Worse, they soon learn that the French have stolen Termeraire and Iskierka's egg. Now, it is do or die, as our heroes not only need to save Temeraire's offspring but also to stop Napoleon for good!

From Goodreads:
Aerial combat brings a thrilling new dimension to the Napoleonic Wars as valiant warriors rise to Britain's defense by taking to the skies . . . not aboard aircraft but atop the mighty backs of fighting dragons.

When HMS Reliant captures a French frigate and seizes its precious cargo, an unhatched dragon egg, fate sweeps Capt. Will Laurence from his seafaring life into an uncertain future–and an unexpected kinship with a most extraordinary creature. Thrust into the rarified world of the Aerial Corps as master of the dragon Temeraire, he will face a crash course in the daring tactics of airborne battle. For as France's own dragon-borne forces rally to breach British soil in Bonaparte's boldest gambit, Laurence and Temeraire must soar into their own baptism of fire.

My first review of His Majesty's Dragon
My Review:
Yeah, I loved reading the rest of this series! And then when I finished, I just had to go back to the beginning, even though it'd been less than a month since I'd first read it. This series was just that good, and that enjoyable!

This book picks up in a great place for readers, not so much for the characters, since Lawrence and Temeraire are separated, and Napoleon invaded England. Victory of Eagles is the first time that we've gotten Temeraire's POV, and I only wish that we'd gotten it sooner, I loved seeing things from a dragon's perspective!

Tongues of Serpents is maybe the slowest, plot wise, because they've both been benched, on the other side of the planet. But there were still a lot going on, like the politics of the colony, and the one egg being stolen and the other hatching and being pretty unexpected!

Crucible of Gold was so great, because it added a few things. Well, there was the loss of Riley, which really sucked, but we got to meet the dragons of South America (Every continent but Antarctica and North America!) and they added a new perspective of the humans being family, belonging to their dragons. I loved how Temeraire absorbs this!

Blood of Tyrants, it had a few parts. Like, Lawrence with his memory loss. And then there was the section where they were in China. And then they moved on to Russia. So there was a lot going on. One thing that was hard for me to read, was the way that the Russians treated their dragons, that if a dragon's captain was captured, the dragon would still fight. Because they were in it for the treasure, and didn't have the bonds that other dragon/human pairs had. And then there was the breeding pits. Just devastating!

League of Dragons was so great, that we got to see all these familiar faces that we've met previously come together, that was just so fantastic to read! There was also Temeraire and Iskierka's egg, and when it hatched, wow, she was a great and fascinating character! Loved her perspective on the world!

Honestly, I wish we'd had more of an ending! Fighting Napoleon and the French army has been a part of this series since the beginning, and we didn't even get to see Napoleon captured, just the aftermath. And then where people were ending up, and the future plans of Lawrence and Temeraire. I just wish that we could've gotten some more!

Of course, going back to the beginning, seeing Temeraire after he was first hatched, and was just so cute, and knowing what was going to happen, was a must! There were little hints as to where the series would go, and I just loved reading the beginning again!

This series was absolutely amazing, unique, wonderful, and I loved reading it!